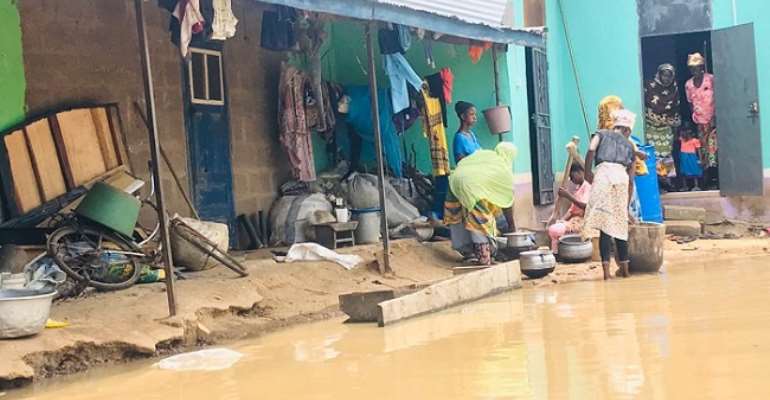 About 55,235 persons have been affected in the heavy downpour and resultant floods in addition to the spillage of the Bagre Dam in the North East Region.

About 3,952 persons have been displaced internally with 206 communities affected and nine persons confirmed dead in the North East region.

The assessment team made up of NADMO (Regional and District MMDA Level), Environmental Health (Regional and MMDA level), WFP, UNICEF, PLAN Ghana, Global Communities indicated in their report that most places were still inundated by floods and therefore communities were not accessible unless by canoes.

The assessment team said hundreds of houses have totally collapsed, with displaced persons living with relatives, in schools, and private building in some communities.

The team revealed that NADMO has inadequate logistics and human resources at the MDA and zonal levels. Items such as rafts and lifejackets to enable them reach cut-off areas were inadequate as well as the lack of communication equipment, computers.

The team said there was a slow response by MDAs when the flood gates of Bagre dam were opened coupled with the torrential rains, adding that preparedness, capacity and coordination within keys sectors is a challenge in North East Regions.

“Human and logistical capacity of NADMO to deliver especially at the decentralized level (district and zonal levels) is not enough to respond adequately.”

The assessment team however recommended that there is the need to strengthening the capacity of NADMO in coordination, preparedness and response to provide the required (optimum) level of technical support particularly at the decentralized level. In this regard, existing sectoral platforms should be explored and their focus on emergency/humanitarian response issues enhanced.

Government responded by donating relief items to the affected communities (persons) by the Vice President of the Republic of Ghana and the Regional Minister for North East paying visit to Kunkwa and Loari respectively in the Mamprugu/Moagduri District.

They also offered their condolences to the bereaved families who have lost relatives during the floods. Families who lost their relatives received Ghc500 each in addition to food and other relief items.