The Law On Corporal Punishment (canning) Parental Control In Ghana 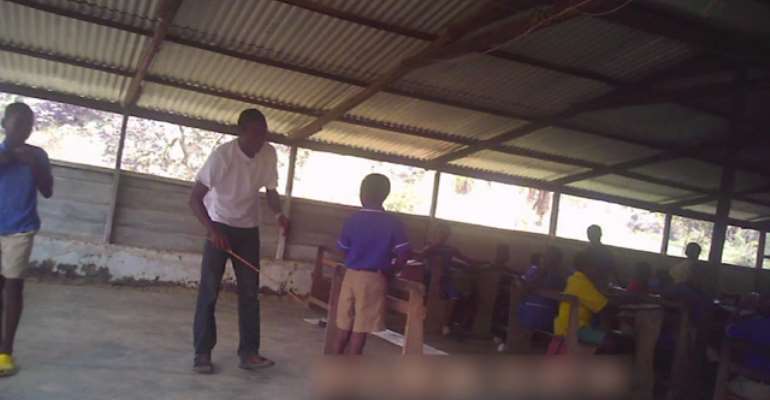 By way of definition, Straus & Donnelly (2005) defines corporal punishment as the use of physical force intended to cause pain, but not injury, for correction or controlling a child's behavior. Literature shows that many people have indeed defined corporal punishment in their own opinions. However, I find the definition above ideal for this article since it indicates the purpose of corporal punishment, thus, to correct deviant behaviors and not to injure the child. A child per the Constitution, 1992, is any person who has not attained the age of 18. However, in the context of corporal punishment, a child would be any child under sixteen (16) years of age (Section 41 of the Criminal Offences Act 1960). This article, among other useful information, seeks to address the primary question of most parents on whether their children can sue them for disciplining them and to what extend the law allows parents to discipline their children.

As stated earlier on, corporal punishment has a wide range of acceptance that it is seemly impossible to find an individual within the Ghanaian society who can boast of never being beaten in his childhood or has never beaten a child to stop a deviant behavior. If one is ever exempted from corporal punishment in the home, you may be less likely to be exempted in the school. Most corporal punishments meted out in the homes by parents or legal guardians or in the schools, by educators and school staff includes hitting, squeezing, whipping pinching, paddling, pulling hair, slapping, kneeling, and among others.

Corporal punishment has long-lived and has religious and legal approval in some jurisdictions. In the Jewish Orthodox Bible, Proverbs 22:15, states that “Foolishness is bound in the heart of a child, but the rod of correction shall deprive it of him". Also, Proverbs 19:18 declares that “chasten thy son while there is hope, let not thy soul spare for his crying.” Finally, the most popular verse in this context states that “He that spareth the rod, hateth his son; but he that loveth him, chasteneth him betimes (Proverbs 13: 24). Customarily, in the Northern part of Ghana, it is widely believed that refusing to resort to canning or other modes of corporal punishment is a bad method of child upbringing, and encouraging the deviancy of children.

Legally, Section 41(a) of the Criminal Offences Act, 1960 (Act 29) approves that a father or mother may correct his or her legitimate or illegitimate child, being under sixteen years of age, or any guardian, or person acting as a guardian, his ward, being under sixteen years of age, for misconduct or disobedience to any lawful command. It is significant to state that Ghana has put a halt to corporal punishment in schools but there is no clear amendment of Section 41 which halts corporal punishments in the home.

For a better understanding of “Justifiable and reasonable” application of force, it would be significant to state the facts and holdings of A v. United Kingdom (1999) held in the European Court of Human Rights.

The facts of A v. UK (1999) are simple: the victim of the punishment (and for convenience would be hereinafter referred to as “A”) was canned by his stepfather with a garden stick. The stepfather argued that A was ill-discipline and was disobedient to school and parental rules, guardians and control. A pediatrician confirmed A’s injuries were consistent with the use of a garden cane applied with considerable force. The jury found the stepfather not to be in breach of the law as the actions of the stepfather were reasonable chastisement of "A". On appeal to the European Court of Human Rights, "A" argued that the state has failed to protect him from the maltreatment of his stepfather. The Court allowed the appeal and held that there was a violation of Article 3 of the European Commission on Human Rights. To the court, ill-treatment must attain a minimum level of severity if it is to fall within the scope of Article 3. Essentially, the court stated that child discipline utilizing corporal punishment that leads to injuries or actual bodily harm cannot be said to be justified on the grounds of reasonable chastisement and punishment. A nine (9) year old boy found to be injured by the severity of canning cannot be said to be reasonable chastisement.

Even though the judgment in A v. UK (supra) admonished the United Kingdom to adhere to the rules as stated in CRC of the United Nation abolishing all forms of corporal punishment, the UK’s Children’s Act, 2006, does not abolish corporal punishment in the homes but requires that no one deliberately or recklessly causes injury to a child which is more than transient and trifling (See Section 58 of the Children’s Act). Therefore, section 58 of the current Legislation-the United Kingdom's Children Act removes the defense of lawful chastisement for parents or adults acting in locus parentis where the accused person has caused grievous bodily harm or injuries in the bait of correcting the child.

The justification of lawful correction has always eliminated unreasonable assault against children. In R v. Hopley (1860) 2F&F 202, the court stated that “By the law of England, a parent may correct what is evil in the child inflict moderate and reasonable corporal punishment, always, however, with this condition, that it is moderate and reasonable".

Relating the above precedents in the United Kingdom to the Ghanaian Section 41 (a) of the Criminal Offences Act, 1960, it is obvious that the wording of the section is not so different from the position of the law in the United Kingdom. Therefore, the interpretation of justifiable and reasonable as stated in the Ghanaian laws can be said to mean not causing unreasonable bodily harm to children. The canning, slapping, or pinching must be very moderate never to cause grievous bodily harm to children. Also, punishment is not justifiable if because of the young age of the victim, he or she is incapable of understanding the purpose of inflicting corporal punishment (Section 41(2) (3) of the Criminal Offences Act, 1960).

The excess of the application of force to children will amount to liabilities in assault and battery. In a few instances, parents seem to exert so much force on children; it is unlawful and there is no protection of the law for such assailants on the grounds of the reasonable and justifiable chastisement of the child in the process of child upbringing. The lives of children must be adequately protected from assaults and excessive corporal punishments.

Due to the excesses, international bodies and scientific research have gotten involved in the discovery of the effects of corporal punishment on children. The results have always remained undesirable: “In a major meta-analysis, all 12 studies found that corporal punishment is significantly associated with a decrease in children’s mental health, including with behavior disorders, anxiety disorders, depression and hopelessness” (Talwar V, Carlson SM & Lee K, Effects of a punitive environment on children’s executive functioning: A natural experiment. Social Development,20, 805–824).

Consequentially, the United Nations Convention on the Rights of the Child (UNCRC) which sets out international norms for the political, health, social, economic, and cultural rights of children demand that member states abolish corporal punishment.

Article 19(1) of UNCRC provides that “States Parties shall take all appropriate legislative, administrative, social and educational measures to protect the child from all forms of physical or mental violence, injury or abuse, neglect or negligent treatment, maltreatment or exploitation, including sexual abuse, while in the care of parent(s), legal guardian(s) or any other person who has the care of the child.

Article 37 states that “States Parties shall ensure that: (a) No child shall be subjected to torture or other cruel, inhuman or degrading treatment or punishment.”

Ghana is a signatory of the UNCRC and ought to adopt the provisions of Article 19 and 37 of the UNCRC. However, it is difficult to achieve a Ghana where no parent can even correct a child without any form of spanking, pinching, canning, or even a little slap. Section 41 of Act 1960 remains unamended even though many people advocate for its amendment. Reasonably, before Article 19 of the UNCRC can be achieved fully, Section 19 has to be amended. However, it the writer’s suggestion that this process of introducing a whole new culture of child upbringing should be progressive in the Ghanaian society. the Ministries are making broadcast and educating the populace on the effects, that is a commendable activity.

Parents should rather, as it stands now, be encouraged to correct their children reasonably and justifiable since it will be strange and practicably difficult for parents to assimilate a whole new culture and halt a long-lived belief in the corrective nature of the cane.

Whilst transforming the Ghanaian society progressively, education must be made available on how one can correct a deviant behavior without resorting to corporal punishment. Additionally, they should be educated, in the time being, the effects and legal consequences of meting out extreme corporal punishments. It is not however impeccable to expect the whole populace to give a universal approval to corporal punishment-free child upbringing within a short period, therefore, stakeholders must educate parents on the current law, thus, justifiable and reasonable chastisement (Section 41 of Act 25).