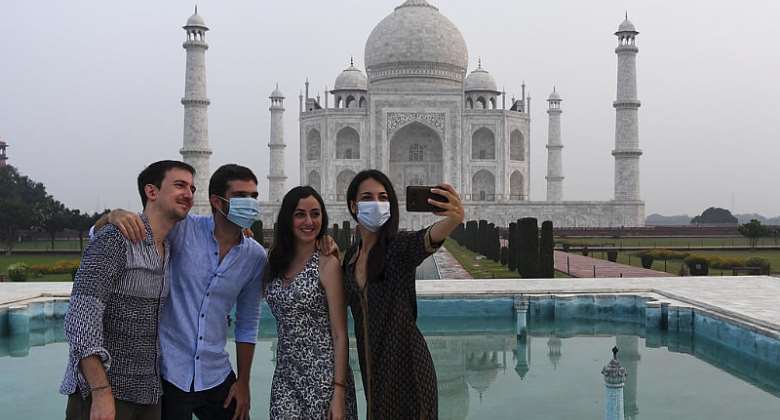 After being shut for some six months due to the coronavirus, India's top tourist attraction, the Taj Mahal, has reopened.

The northern city of Agra, home to the 17th-century architectural marvel, was galvanised into action when the Archaeological Survey of India (ASI) opened up the iconic monument to visitors.

Both the Taj and the adjacent Agra Fort were closed to tourists from March 17 under the Covid-19 lockdown.

Precautions and guidelines issued by the city administration and the ASI stipulate a maximum of 5,000 tourists that can enter the monument. At the Agra Fort, the maximum is set at 2,500.

“We have been careful while opening up. Yesterday 1,230 people visited the Taj and it went off smoothly,” Vasant Kumar of the ASI told RFI.

“There will be no window ticket sale. Visitors can scan the code to purchase tickets or book online through the ASI website or the mobile app.”

The Taj Mahal will have visitors in two slots — pre-lunch and post-lunch. In each slot, there will be a maximum of 2,500 visitors. Official photographers to the monument have been divided into groups to be allowed entry on alternate days.

The famous white-marble mausoleum which houses the graves of Mughal emperor Shah Jahan and his wife Mumtaz Mahal usually draws 7 to 8 million visitors a year.

Since the lockdown, various stakeholders such as tour operators, hotels and restaurants had to shut shop because of the pandemic.

“The city's economy is linked with the Taj and finally there is some relief for everyone whose earnings suffered. It will take a while to get back to normalcy but the good news is that it has opened,” Agra's district magistrate Prabhu Singh told RFI.

Most of the heritage monuments protected by the ASI were closed during the pandemic and began opening up in early July when restrictions began to ease. Almost 3,700 monuments across the country opened up except for the Taj Mahal and the Agra Fort.

It was the first time since the India-Pakistan wars in 1965 and 1971 when Taj Mahal was closed to the public.

The site, one of the New Seven Wonders of the World, stands on the bank of Yamuna, and is always high on the itinerary of visiting heads of state.

US President Donald Trump and First Lady Melania Trump visited the mausoleum, built as a monument of love, in February. Accompanied by daughter Ivanka and son-in-law Jared Kushner.