Post-Harvest Loss In Watermelon And Tomatoes In Northern Ghana: A Case Of Seasonal Glut Or Market System Failure? 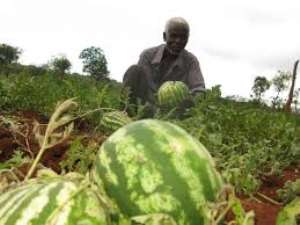 It’s yet again that time of the year in the Upper West Region of Ghana especially within the Wa municipality where there is a lot of tomatoes in the market. Many farmers are harvesting the product and there appears to be a glut. A few weeks ago, this was the case of watermelon. There was a glut of it in the market in places like Paala in the Wa West and other watermelon production centres.

Though attempts have been made to explain the situation as being occasioned by the COVID-19 pandemic, it has not been different in pre -Covid-19 era. Hence, as usual the glut comes with the challenges of post-harvest loss (PHL) of tomatoes and watermelon and consequently losses in incomes of farmers.

Situation of PHL in Watermelon and Tomatoes

Post-harvest loss is one of the major challenges in the Agriculture value chain. It is generally defined as all the quantitative and qualitative losses that are incurred along the commodity value chain after harvest until the produce reaches the final consumer. Therefore, from production to consumption, PHL can occur where some of the produce does not reach the final consumer but is lost along the chain. In Ghana, it is estimated that the country losses USD700, 000.00 annually to post-harvest losses.

The Ministry of Food and Agriculture estimates that 20-50% of perishables like fruits, vegetables, root and tuber crops that is produced in the country is lost due to post-harvest losses. Watermelon and tomatoes fall under the category of perishables and therefore are highly susceptible to losses.

Causes of PHL in Watermelon and Tomatoes

A major cause of PHL in tomatoes and watermelon is poor handling of the produce by farmers. Watermelon and tomatoes are perishable products, and therefore the way it is handled is very important in preventing losses. They require the right knowledge in terms of handling them and the adherence to good agronomic practices around the products. The absence of these makes them to be susceptible to losses.

Poor road linkage is another contributory factor to high PHL of farm produce like watermelon and tomatoes. Many roads linking production centres and urban areas are not in the best of shapes. For instance a community like Paala in the Wa west district is one of the communities where water melon production is high, but the road linking Paala and Gusi can best be described as non-existent. Many watermelon and tomato farming communities across Northern Ghana have similar challenges. The absence of good roads therefore heightens the losses incurred by farmers who are into the production of these perishables.

Inadequate market for watermelon and tomatoes contributes to high losses. Currently there appear to be a glut of tomatoes within the Wa Municipality of the Upper West Region as many farmers have difficulty accessing market for their produce. Many farmers are not able to get market and given that the produce is perishable, a lot of it is lost.

Also, appropriate storage facilities for tomatoes and watermelon is lacking and hence contributing to high losses of the produce. Currently, there are inadequate cold room and packhouses for vegetables and fruits in the Upper West Region. For instance as at 2017, in the entire Upper West Region there was only one packhouse located in Jirapa. This therefore is a major challenge in storing the produce so as to minimize losses.

Effects of PHL in Watermelon and Tomatoes on Farmers

Post-harvest loss incurred in the production and consumption of watermelon and tomatoes has serious implications on farmers and food security in general. It denies the farmers income. An increase in PHL constitutes an unfortunate and avoidable reduction in the incomes of farmers. It shows that produce that could have been sold and accrue as income to the farmer is lost.

It also constitutes a waste of resources. There are many resources that are committed to production such as land, water and other key inputs. Therefore, PHL is an unsustainable way of engaging in agriculture as a means of livelihood. It amounts to wasting the resources that have been committed to the production process.

PHL in watermelons and tomatoes also poses a threat to the food and nutrition security of the country. In this period of the COVID-19 pandemic, when the consumption of products like watermelon and tomatoes could boost the immune system of consumers, PHL denies the food system good and nutritious food. This therefore contributes to nutrition insecurity of many people.

In order to get these issues addressed, there is the need for strong public investment in rural infrastructure to augment the existing ones. For example road networks connecting farming communities to market centers needs to be constructed for easy transportation of watermelons, tomatoes and other farm produce to the market centres. Failure to do that could further increase the losses.

Additionally, the full implementation of the one-district one factory concept in production centres around the country could also help to curb PHL in watermelon and tomatoes. Such factories could be established to ensure that they process and add value to the raw watermelon and tomatoes. For instance watermelon can be transformed into juice to be sold in both the local and international markets. Similarly excess tomatoes can be canned to reduce the incidence of losses.

Besides, strengthening of the market system with information on Watermelon and tomatoes could help curb losses. Currently data on production volumes on the two products is scanty. Information on the variety, the location, the quantities, and the prices of the produce could help other market actors play their roles to ensure losses of the produce are minimized.

In conclusion, the country’s agriculture has been touted over the years as the mainstay of the economy. But if measures are not put in place to curb PHL especially in perishables like watermelon and tomatoes it would reduce the impact of the sector on job creation and incomes generation. Indeed, it would render the farming of the products unstainable. The subsector requires investment that would ensure food security, massive employment and sustainable development. Until that is done, the perennial woes of watermelon and tomatoes farmers is more of a market system failure and not just case of seasonal gluts of the products.

Call e-levy a VAT increase and stop distorting our well esta...
56 minutes ago