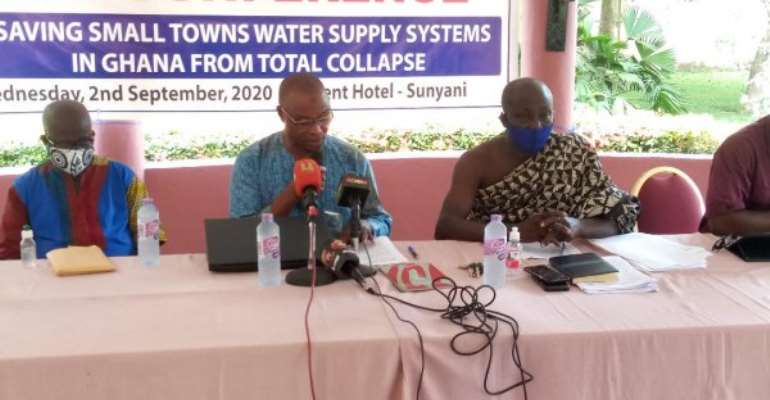 President Akufo-Addo's COVID-19 “free water for all intervention” faces a serious threat as some service providers in rural areas begin to sell water to sustain their economic activities.

According to the Association of Small Towns Water Supply Systems-Ghana (ASTOWAS), many service providers in the rural communities could not continue to provide water relief because they were financially bankrupt.

Addressing a news conference held at Abesim, near Sunyani, the ASTOWAS said the government owed members and other service providers four months arrears, a situation, which had caused huge financial burden on service providers.

“ASTOWAS wishes to remind the government and the Ministry of sanitation and Water Resources that the availability of water in the rural and semi-urban communities will depend upon expedited payments for the flagship water for all programme”, said Mr Ahmed M. Issah, the Secretary of the Association.

“ASTOWAS was appalled by the advance payments released by the Community Water and Sanitation Agency (CWSA) dated August 14, 2020, as part payment of the validated water bills for April 2020”.

Mr Issah, therefore, called for the immediate publication of the total amount released by the Ministry of Finance and Economic Planning disbursed to service providers under the government's free water supply for all relief.

He, however, commended President Nana Addo Dankwa Akufo-Addo for the water relief and payments made to the service providers so far but expressed discomfort that the amount paid to them had several anomalies.

Earlier, Mr Hamza Zakaria, the President of ASTOWAS, explained the conference was necessitated by a number of debilitating actions and inactions of recent times that had exposed the national weaknesses and negligence of authorities in rural water services.

“We are equal partners in the rural water sector who expect the government and the Ministry to recognise the selfless contributions we are making to the rural communities and accord us with the respect deserved”.

Mr Zakaria appealed to the government to expedite action and for the early release of the outstanding amounts for the remaining months to help sustain service providers to supply free water relief.

Established in 2005, ASTOWAS is a non-governmental organisation made up of private water service providers, mostly operating in rural communities.

Your MMDCE list plagued by inequalities entrenched in the du...
41 minutes ago