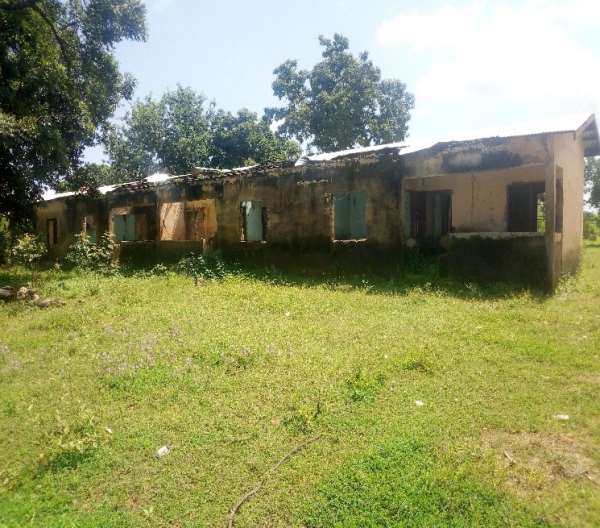 Pulbaa community is located in the Daffiama Bussie Issa District of the Upper West Region. In entering the community, one would be excited that, the provision of primary school block would enable in bringing access to quality education to the community. A cursory view of the school block and critical analysis would dash your hope, admiration, and initial thoughts of the school infrastructure.

The reality is that; the primary school is considered by residents of Pulbaa as non-existent. The sad development has been that, since the establishment of the school in 2001 by the Kuffour- Aliu Mahama led administration, the teachers’ bungalow has never been put to use simply because of structural defects. Part of the reasons has also been lack of water facility and electricity to the community. Although the community has now benefited from the rural electrification projects, the facility has been left to root and overtaken by the overgrowth of weeds and reptiles such as snakes. The roof has rip- off and parts of the building started falling. The best described to the facility is a dangerous building.

The fundamentals one need to ask is;

The absence of teachers' quarters has led to many teachers living in the Wa Municipality the Upper West Regional capital and ride every day to the school. This according to residents is not helping matters as contact hours between students and teachers is reduced. The problem of the school is not only limited to the sorry state of the teachers’ bungalow, rather it extends to the school block. Most of the classroom doors are broken and windows as well. Pupils share the facility with animals. While pupils use the facility during the day, their farm animals, goats, sheep and pigs take over the facility during the night.

One could just wonder the frustration and struggle pupils go through when there is a heavy downpour. It was not out of context for residents to be demanding more. Their appeal is for a nursery and Junior High School block, as well as the rehabilitation of the primary school block and the teachers’ quarters for the community, to have a feel of quality access to education.