Towards Water Security in Africa 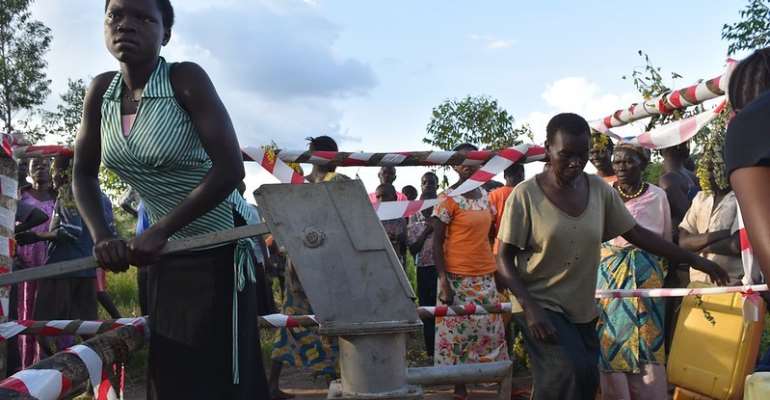 This water source is essential for securing the local population and South Sudanese refugees who have taken refuge on the Congolese territory following the crisis in South Sudan. Credit: Photo MONUSCO/Anne Herrmann

Data from the United Nations Environment Programme (UNEP) suggests that Africa is home to 63 international transboundary river basins that cover approximately 64% of the continent’s land area and also hosts 93% of the region’s entire surface water resources yet a large percentage of the population do not have access to clean water – highlights from a recent study published by the Deutsche Gesellschaft für Internationale Zusammenarbeit (GIZ) GmbH indicates that with an estimated urban population growth of 1.3 billion by 2050, urbanization in SSA has outpaced progress on water coverage as access to piped water has declined from 67% in 2003 to an all-time low of 56%. Although North Africa made tremendous progress by extending water coverage to 92% for the Millennium Development Goals (MDGs), the water coverage for Sub-Saharan Africa (SSA), was only 61%, failing to reach the 75% target set by the MDGs for the region. An analysis of data from 35 Sub-Saharan African countries, thus 84% of the region’s population reveals that more than 90% of the richest quintile in urban areas use improved water sources with over 60% having piped water on their premises.

Conversely, in rural areas, less than 50% of the population have access to improved water sources and piped-in water is not available to the poorest 40% of households.

In SSA, a large percentage of the population usually trek long distances before they get access to water – women and girls spend 40 billion hours per year, collecting water. This annual contribution from women and children in SSA is equivalent to the total value of labour for France’s entire workforce in a year. In SSA, a single trip to collect water could take an average of 33 minutes in rural areas and 25 minutes in urban areas.

A study published by the National Center for Biotechnology Information (NCBI), reveals that in 24 countries in SSA, more than two-thirds of the population leave their homes to collect water - approximately 13.54 million adult females and 3.36 million children are responsible for the collection of water in households with the time for collection exceeding 30 minutes. This precarious condition exposes the population in the region to many health risks. According to United Nations Children’s Fund (UNICEF), due to lack of water in SSA, about 180,000 children under the age of 5 years die every year, thus 500 children die a day as a result of diarrhoeal diseases linked to inadequate water.

The population of SSA has almost doubled in the last 25 years but access to water in the region has increased to only 20 percentage points within the same period. Currently, close to 50% of the world’s population without access to improved drinking water live in SSA. With an estimated US$260 billion per year global economic loss attributed to inadequate water, hygiene and sanitation; Central Africa and West Africa, the two sub-regions with the worst access to water are heavily affected by this economic loss. A joint report from the World Health Organization and UNICEF reveals that no country in Central Africa and West Africa has universal access to water – although Sao Tome & Principe, Gabon and Cabo Verde have the highest water coverage rates of 97%, 93% and 92%, respectively, there are countries such as Equatorial Guinea, Chad and Democratic Republic of Congo where about half of the population in these countries do not have access to drinking water.

The United Nations Environment Programme (UNEP) estimates that by 2025; 25 countries in Africa will experience water stress thus, below 1,700 m3 per capita annually. To improve water security on the African continent, Governments should implement evidence-based policies that invest adequately in infrastructure development in the water sector. Currently, African countries invest about 0.5% of their Gross Domestic Product (GDP) and a small percentage of foreign assistance to the development of the water sector. According to the International Monetary Fund (IMF), Africa’s annual infrastructure investment gap is about US$22 billion. This infrastructure deficit is worsened by poor management, below-cost recovery tariffs and low collection rates, especially in countries with relative abundant water resources – the World Bank recently conducted a study to assess the performance of water supply service providers in Africa. The findings of the study show that about 50% of these utilities have not generated enough revenue to cover their operation and maintenance costs. This perilous condition can be curbed by enhancing the operational capacity of private and public utilities via sufficient resource allocation and the implementation of anti-corruption policies in these organizations.

Again, to manage water resources efficiently, it is imperative to conserve the forest cover in Africa. Forests in Africa play an essential role in mitigating the impact of climate change – with a rich biodiversity of 20,000 plant species and the Congo Basin which accommodates the world’s second largest contiguous tropical forest, forests on the continent are extremely important in conserving water bodies. Unfortunately, the forest cover in Africa continues to depreciate – according to the United Nations Food and Agriculture Organization (FAO), Africa is the only continent with the highest rate of deforestation, thus 3.4 to 3.9 million hectares per year. Governments and development organizations should invest in reforestation programmes to replenish lost forest cover – this will scale-up the capacity of forests to mitigate the impact of climate change on water resources and also control floods in Africa.

Also, the re-use of wastewater can reduce the rate of extraction of scarce groundwater in Africa – as the population in urban areas soars, the demand for drinking water continues to increase and the volume of wastewater also increases – in Lagos, Nigeria’s largest city, about 1.5 million m3 of wastewater is discharged every day but most of this quantity of wastewater is untreated. Policy makers should channel resources to the development of dams and innovative technologies that focus on low-energy treatment of wastewater, proper disinfection of wastewater and rainwater treatment. These water facilities which include reliable water storage systems should be built in strategic locations to effectively serve the agriculture, industrial and household demand in Africa.

Sumeera Asghar Roy is a PhD candidate in Plant Biotechnology of Fruits at the National Key Laboratory of China and a researcher at the China Agricultural University, Beijing. Sumeera holds a master’s degree in Horticulture from the University of Agriculture, Faisalabad, Pakistan.

Flyover construction: 1 month interruption of traffic at Flo...
15 minutes ago