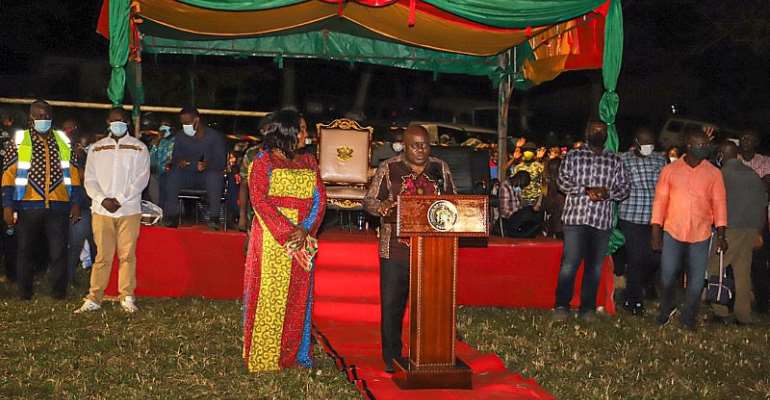 President Akufo-Addo has commissioned a Community Mining Scheme at Aboso in the Western Region.

In a speech at the commissioning ceremony on Tuesday, August 18, 2020, President Akufo-Addo indicated several Community Mining schemes were being commissioned across the country.

According to the President, a gold refinery would be established at Aboso, alongside other mining initiatives.

The commissioning of the Community Mining Schemes is fulfillment of the New Patriotic Party (NPP) manifesto promise.

President Akufo-Addo is on a five-day tour of the Western and Central Regions.

He underscored his party’s commitment to sanitizing the mining sector and ensuring the provision of decent jobs.

Minister of Lands and Natural Resources, Kwaku Asomah-cheremeh, in his remarks, reiterated that the Community Mining Scheme is an innovative policy initiated under the Nana Akufo-Addo Administration.

The Minister indicated that Community Mining Scheme is aimed at providing members of mining communities the opportunity to engage in lawful and meaningful mining ventures and thereby provide sustainable livelihoods for the beneficiaries of the Scheme.

“As provided for within the legal framework of small-scale mining, the Scheme is reserved for only Ghanaians citizens,, but this time round, with an emphasis on members of the host mining Community,” the minister said.

He encouraged all stakeholders including Community members to make the Community Mining Scheme work effectively for the benefit of Ghana.

“Compliance with the good governance and rule of law framework put in place by Government is very important and, at all times, operations should only take place with the requisite licenses and permits from the Ministry of Lands and Natural Resources, the Minerals, Forestry and Water Commissions, as well as the Environmental Protection Agency,” he indicated.

Mr. Asomah-Cheremeh cautioned: “the miners especially are advised to adhere to the rules and regulations as well as best practices. The adoption of the small scale miners code of practice is a must and miners who flout the rules would have their licenses revoked.”

Again, he urged those engaging in Community Mining to put in place robust safety protocols at their respective areas of operation to prevent, not just health and safety hazards associated with mining but also coronavirus.

She highlighted a number of initiatives the President and his wife, Rebecca Akufo-Addo have undertaken in the area.