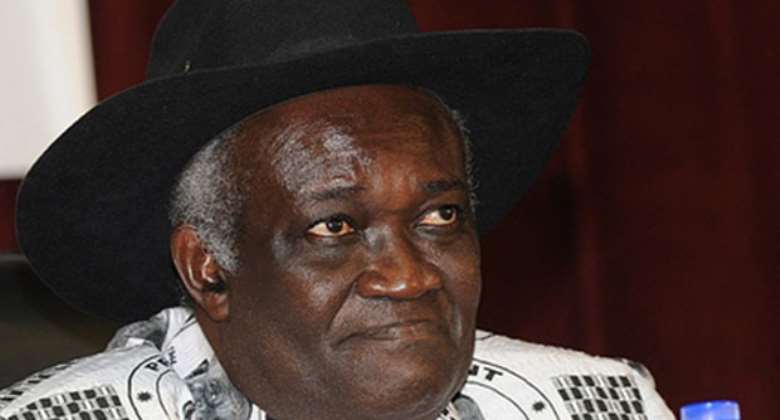 Professor Kwamena Ahwoi has revealed that ex-President Flt. Lt. Jerry John Rawlings considers key people who helped him to consolidate his rule for 19 years (11 years military rule and eight years of democracy) as criminals and that has remained ever since.

In his controversial book Working with Rawlings which has since opened a can of worms and is tearing the opposition National Democratic Congress (NDC) apart, Prof. Ahwoi mentioned the key individuals as “myself, Captain Kojo Tsikata, Ato Ahwoi (my elder brother), P. V. Obeng, Kwame Peprah, and Kofi Totobi-Quakyi.”

He said their 'crime' was that the NDC gurus switched allegiance from Mr. Rawlings to the then President John Evans Atta Mills whom Mr. Rawlings had handpicked as his vice along the line, and Mr. Rawlings as a result felt 'abandoned' and that incurred the wrath of the NDC founder.

Prof. Ahwoi said the first time the tag of 'criminals' was confirmed to him was when he claimed he feigned interest in becoming Chief of Staff to Prof. Mills after several complaints from the NDC rank and file indicated that Henry Martey Newman was not performing and needed to be removed.

“Sometime in late 2010, Nana Akuoko Sarpong, Omanhene of Asante Agogo, and a member of the NDC Council of Elders, visited me in my house. At that time, Professor Atta Mills was the President of the Republic and John Martey Newman was his Chief of Staff. There were, however, many complaints about Martey Newman who was alleged not to be a party man and therefore could not effectively handle the liaison between the party and the presidency. There were loud calls for his removal as Chief of Staff by party members,” he stated in his book.

The book said that “according to Nana Akuoko Sarpong during the visit, the Council of Elders had deliberated on the matter and had agreed with the sentiments of the party members. The Council had decided to advise President Mills to remove Martey Newman as Chief of Staff and replace him with me, and he (Nana Akuoko Sarpong) had been mandated to deliver the message to me and get my acquiescence before the Council tendered its advice to the President.”

He said “I knew that I could do the job but I also knew that I would not do the job. For one thing, Martey Newman had been consulting and working closely with me ever since he was appointed Chief of Staff, and I did not see how I could take his job as if all the time I was working with him I had an eye on his job. For another thing, during the campaign, I had constantly told Professor Mills that I would work for him to get elected but I would not be available to work in his government. I was not about to renege on that promise. So I told Nana Akuoko Sarpong that I thanked the Council of Elders for the confidence it had reposed in me but that no, I would not do the job.”

According to Prof. Ahwoi, “After about three hours of haggling when it became obvious that Nana would not take my 'no' for an answer, I told him, Nana, I will consider the Council’s request on one condition. If I took this position because I knew Rawlings was very unhappy about the fact that I appeared to have switched allegiance from him to Mills and accepting such a position without his blessing would only worsen the relationship between us.”

“Nana Akuoko Sarpong asked me to leave Rawlings to him and that he would handle it. I thought Nana could handle it because he was one of the very few people left who had worked with us in the PNDC system and with whom Rawlings was still very close. Three days later, Nana Akuoko Sarpong returned and told me he suspected I knew what Rawlings’ answer would be and that was why I gave him that 'mission impossible'. According to him, Rawlings told him that I was one of the best persons he had ever worked with. However, I had got myself attached to 'some criminals' and unless I detached myself from those criminals, he would never talk to me,” he added.

Prof. Ahwoi asked, “Who were these 'criminals'?” and went ahead to mention them as Captain Kojo Tsikata, Ato Ahwoi (my elder brother), P. V. Obeng, Kwame Peprah and Kofi Totobi-Quakyi and himself.

“I was scandalised. These fine gentlemen, together with myself had virtually functioned as Rawlings’ “kitchen cabinet” in the PNDC/ NDC Governments…So how could these people be 'criminals' in the eyes of Rawlings? Thus Nana Akuoko Sarpong’s mission ended in a fiasco,” he said.

He also said that NDC gurus like “President Mills himself, Mr. Daniel Ohene Agyekum, Dr. Obed Asamoah, Mrs. Cecilia Johnson, Ms. Sherry Ayittey and many of Rawlings' closest confidantes who worked with him in 'the decade that stopped the decay' (1982-1992) and in the eight-year period of democratic stabilisation (1993-2001),” all fell out with Mr. Rawlings.

Nigel Giasie strikes with another AFCON revelation
28 minutes ago

Don’t compare E-block to our infrastructural development – N...
46 minutes ago