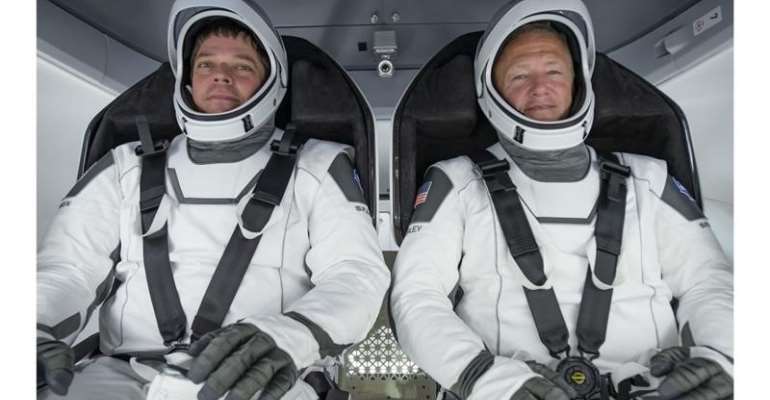 Elon Musk successfully returned American Astronauts from the International Space Station to Earth, 45 years since Apolo Astronauts returned by landing their spacecraft into the ocean which was retrieved by the US Navy, a major feat in manned space flight.

through a combination of Satellite communication from Space to Large Satellite dish on earth which then transmit Data, voice and video communication through fibre optics to large screens and displays at NASA. As one of the four people to invent Fiber Optics, Dr Mensah is marvelled by the far-reaching impact of this technology in all areas of human lives, beyond Social Media.

Dr Thomas Mensah, who is an Associate Fellow of the American Institute of Aeronautics and Astronautics, has also authored an important Book that is critical for Space Vehicle Design and Development. In his Nanotechnology Commercialization Book, he and Dr Joseph Koo of Austin Texas developed Ablative Materials using Nanocomposites for Space Shields and Rocket Motors. During Re-entry the space capsule reaches temperatures of 3400 degrees F, and plasma and electromagnetic fields stop all communication with the Astronauts for 6 Minutes, Such Space Shields prevent serious Damage to the spacecraft. These Nanocomposite Ablative materials are helpful for even the next challenge of sending humans to Mars.

Dr Thomas Mensah who is a Fellow of the US National Academy of Inventors met the Astronaut Garrett Reisman who is Chief Engineer for the Astronauts Program at Space X in Pasadena California and they became friends, and currently serves on the Board of Advisors of the Silicon Valley of Ghana, established by Dr Mensah at the Kofi Annan Center in Ghana.

The Dragon I Spacecraft was developed as a Public-Private Partnership between NASA and Space X. a Private Company. Ghana is using this model for its Mega projects like the High-Speed Rail being developed by the Railway Ministry. Ghana must continue to invest in Technology even during the COVID-19 crisis.

UAE, the United Arab Emirates has recently sent a satellite to explore the Red Planet during the COVID-19 Crisis, one of the few Non-Super Power Countries to do so. This will ensure that UAE enjoys the benefits of space technology spinoffs as well as help UAE children and students to become Space Scientist and innovators in the future. Such bold investments and vision explain how UAE turned a desert country into one with nice cities like Abu Dhabi and Dubai the latter being the fourth most visited city on the planet.

Dr Thomas Mensah is currently focusing his attention on the Development and Industrialization of Ghana and Africa using his vast network in the Scientific and Technological world so as to move Ghana and Africa into the 21st Century.