Voting Among Ghanaians: The Ethnic Factor 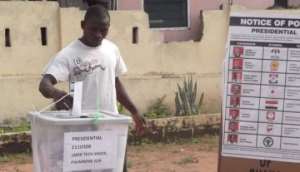 One of the cardinal principles of the democracy is a mechanism which allows the people to express their views on a body of people who act on their behalf. This is in sync with popular sovereignty which hinges on the notion that a government's power springs from the people to ensure legitimacy and acceptability it.

There are several instances where people ridicule others with statements like "you have spoilt your ballot or vote" for voting for a particular candidate in an election all owing to the fact that they ought to have voted in a particular line because of their ethnic orientations.

Interestingly, this phenomenon percolates academia too because my 2013 research entitled "Voting Amongst University Students: The ethnic Factor" conducted as part of the requirement of my bachelor's degree at University of Education, Winneba revealed a deep-seated rationality problem as the university student of the 21st Century was more than ready to vote for candidates with departmental or faculty leanings, course mates among others during SRC Elections of which the irrational chauvinism of ethnic or tribal belonging formed a quintessential building block of it.

Very regrettably, some of my friends including myself voted for people based on just appearance especially female candidates whose facial looks appeared not too good were sure to lose our votes so having lived this phenomenon, I believe am better positioned to point out some of these deficiencies to impact positively on our voting preferences.

It is instructive to point out that this phenomenon is not uniquely associated only with Ghana but is traced to some developed democracies as well. The Democrats and the Republicans for instance have their respective strongholds but the preponderance paramountcy of same in Ghana even amongst the literate who are supposedly enlightened give me, and I believe many, cause to worry about.

There may not be definite criteria in the determination of what is rational in respect of voting because what is rational to one may be completely irrational to the other depending on their aims and aspirations but one thing that is imperative and irrefutable in this discussion is competence.

Therefore, the height of the problem is if the educated who are clothed with knowledge to analyse the policies and programmes of the various candidates to know those attainable or otherwise are swimming in the pool of ethnic bigotry without any reference to competence, what would we have to say about the uneducated masses of our people?

According to one political thinker, "we must achieve sufficiency for all before there is superfluity for some"

If all Ghanaian people agree with the above statement, then we have the onerous responsibility to vote for competence and also educate our illiterate masses to do the same in order to bridge the gap between the "haves and the have nots".

One very instrumental suggestion to curb this menace is for politicians to be highly measured in their campaign speeches to engender national cohesion and also remain resolute in bringing development to perceived areas of little or no influence in terms of votes to change the mindset and defeat this anomaly in the foreseeable future.

Happy birthday to me