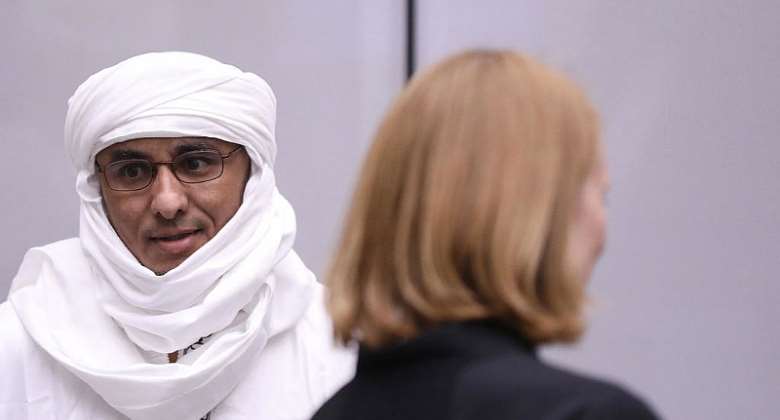 The International Criminal Court in The Hague opened the case against Al Hassan Ag Abdoul-Aziz on Tuesday, for alleged crimes against humanity and war crimes committed during the occupation of Timbuktu by hardline Islamist militant groups Ansar Dine and Al Qaeda in the Islamic Maghreb (AQIM) in 2012.

Al Hassan refused to answer the 13 charges against him, choosing not to enter a plea of guilty or not guilty, but acknowledging that he understood the charges.

His lawyers filed a last-minute motion questioning his fitness to stand trial, saying that their client was showing signs of disassociation due to maltreatment, serious impairment and avoidance of memories, according to a doctor who spoke to the defendant by telephone. Al Hassan's defence team want the court to carry out a full medical assessment.

'Tyranny' of the hardline Islamists
ICC Prosecutor Fatou Bensouda in her opening statement said Timbuktu was subjected to the “tyranny” of Ansar Dine and AQIM for 10 months, who created organs of control – the Islamic police and Islamic court.

"Their plan and design was to subjugate the men and women of Timbuktu to their power and control,” said Bensouda, addressing the court.

ICC prosecutors said Al Hassan was the head of the Islamic police and involved in the work of the Islamic courts in Timbuktu, carrying out its decisions, playing a central role in meting out punishment.

He is accused of torture, rape, sexual slavery and other inhumane acts, including forced marriages and persecution. ICC Prosecutor Fatou Bensouda said Al Hassan was responsible for monitoring the city's inhabitants and their compliance with their interpretation of Sharia law, describing him as a “relentless commissioner”.

Al Hassan was notably responsible for the forced marriages between jihadist fighters and the women of Timbuktu, resulting in repeated rapes, said Bensouda, citing one victim who told the prosecution, “all that was left of me was a corpse”.

Bensouda described one example of a man whose hand was amputated in public with Al Hassan allegedly playing a role in this "criminal and brutal mutilation".

Defence lawyers for Al Hassan have already refuted these accusations during preliminary hearings in July 2019, saying he is, “not a radical, nor a misogynist, or a jihadist”, according to reporting by RFI correspondent Stéphanie Maupas.

Al Hassan's lawyers said on Monday that there were grounds to dismiss his criminal responsibility, that his conduct had been coerced.

He allegedly carried out sentences without the judgement of a regularly constituted court causing “outrages upon personal dignity” as well as “intentionally directing attacks against buildings dedicated to religion and historic monuments”, according to the prosecutor, when jihadists destroyed the city's fabled shrines using bulldozers.

UNESCO world heritage site destroyed
Timbuktu is known as the "the city of 333 saints" with Sufi shrines and mausoleums that had been a place of pilgrimage for centuries. The hardline Islamists said they considered the structures idolatrous.

The crimes are said to have taken place between 1 April 2012 and 29 January 2013 during the Ansar Dine and AQMI takeover of the Malian capital.

The trial could go on for several years depending on the complexity of the case, according to the ICC.

In the preliminary phase, 880 victims took part in helping to establish whether the case met the criteria to warrant an investigation. Another 270 new victims who have come forward could also participate in the trial.

Al Hassan faces up to 30 years in prison if found guilty, or in extreme cases the ICC can hand down a sentence of life imprisonment. The court can also order reparations including money, return of property, rehabilitation or symbolic gestures such as apologies or memorials.

Al Hassan is defended by Melinda Taylor, an Australian lawyer who previously represented Julian Assange, and Nicoletta Montefusco, a lawyer who has been called to the bar in Italy and the US, and has worked as a legal consultant on the ICC case against Saif Al-Islam Gaddafi.

Taylor has already urged that the case be dismissed, claiming that Al Hassan was tortured by Mali's Directorate of Territorial Surveillance (DST) shortly after his arrest in 2017, before he was transferred to The Hague in March 2018.

Covid-19 has complicated the case with the prosecutor having to interview victims by video conference. The defense complained that the pandemic has also made essential investigations on the ground in Mali impossible.

Mankessim: Kenkey seller knocked down by a speeding vehicle ...
39 minutes ago