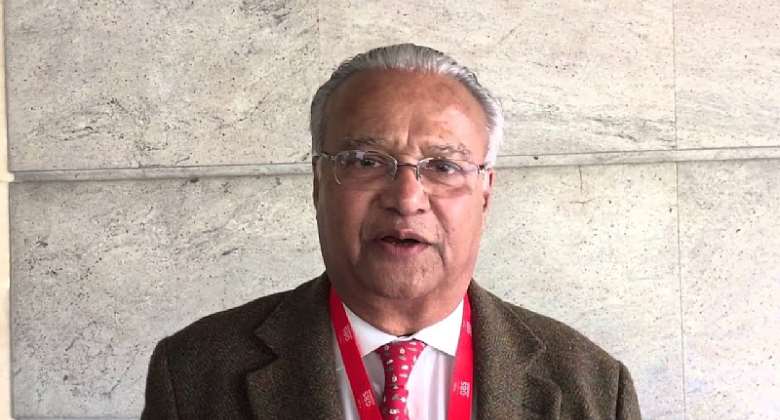 “International trade should not be looked in isolation and not just in terms of their volume and value but in respect to its linkages with developmental concerns, particularly in regard to access to basic needs,” said Pradeep Mehta, Secretary General, CUTS International.

He was moderating a webinar titled “What would happen to a world without the WTO?” having speakers representing various regions of Africa.

“It is time to take a closer and a more holistic look at the linkages between trade and sustainable development by putting equal emphasis on their economy, equity and environmental dimensions. It should not be a sanctions-based approach but should emphasise on arriving at a positive, forward-looking agenda with social safety nets as its central theme,” he underlined.

More than 100 stakeholders representing trade officials, experts, academia, civil society organisations, think-tanks and media from different parts of Africa and the rest of the world participated in a lively discussion.

According to Erastus Mwencha, Chairman, TradeMark East Africa and former Deputy Chairman of the African Union Commission: “We really need to interrogate the whole process of the functioning of the WTO. That will help us having a better understanding of why there are so much of systemic challenges.” “We need to reinvent the WTO through structural transformation so as to derive better values out of it through a more balanced but faster decision-making process. This is an imperative in the post-Covid world. We need a better global leadership,” he added.

Magda Shahin, Professor and Director of the School of Global Affairs and Public Policy at the American University in Cairo underlined the irreplaceability of the WTO as it is a rules-making and enforcing body. She reminded the audience that the rule-setting and adjucating functions of the WTO are inter-linked. There are no other multilateral bodies of this nature.

“Following the conclusion of the Uruguay Round, a fundamental dis-balance emerged. While developed countries wanted to move too much and fast on new issues, developing countries placed excessive emphasis on deriving developmental benefits out of the multilateral trading system. The WTO as a whole system could not take forward new issues in a manner that they should have been. The result is an increasing dichotomy between real and financial sectors of our economies, particularly in respect to trade in financial services” she added.

Talking about the importance of the multilateral trading system in fostering certainty and stability to international trade, Faizel Ismail, Director of the Nelson Mandela School of Public Governance at the University of Cape Town and former Ambassador of South Africa, he posed what type of multilateralism that we need today in a Covid-induced world.

According to him, “This crisis of globalisation is a result of inequalities as hyper-globalisation ignored the need of the marginalised and the poor. This led to populism in various avatars with shifting power dynamics within and across countries.” “The Covid crisis exposed the inherent contradictions in the WTO-led trading system, which was already asymmetrical in nature. As a result, we are seeing increasing instances of export restrictions and also re-shoring. The impact of this in Africa is and will be severe,” he added.

Therefore, for a more balanced trading system, we have to bite the bullet of managing the present form of globalisation by balancing trade rules and it should not become a convergence club. We have to also create the necessary space for a more inclusive development within and between countries. Countries need to re-industrialise through embedded liberalisation. Regionalisation or localisation should be looked at more from the angles of addressing non-traditional aspects of security, particularly health and food security.

According to Cheikh Tidiane Dieye, Executive Director of Dakar-based African Center for Trade, Integration and Development, “We should recognise that the challenges faced by the multilateral trading system are not new. While they may not be in the same form from the beginning, they have evolved over time with changing geo-economic and geo-strategic developments.”

“In order to find solutions to present challenges, we have to manage various perceptions and see how close or far they are from realities. The cotton subsidy issue, which is yet to be resolved is a manifestation of this difference. Going forward, it is important to recognise the needs of the least developed countries by focusing on their capacity to utilise the available policy space,” he added.

Chenai Mukumba, Director of the Southern Africa Regional Centre of CUTS argued that what the Covid pandemic has shown is a kind of a glimpse of a world without a rules-based system. As a result of stoppage of trade, commodity-dependent countries are facing huge difficulties and that is started getting reflected in other important areas such as food security.

This was the third of a series of webinars on this subject being organised by CUTS International, a global public policy think- and action-tank promoting consumer welfare through trade, regulations and governance. The first two had speakers from the Asia-Pacific region. Two more are scheduled to be held in the month of July and will have speakers from the Americas and Europe.

With its headquarters in Jaipur, India, CUTS International has regional centres in Accra, Lusaka and Nairobi covering West, Southern and East Africa. Besides them, it has centres in Hanoi, Geneva and Washington DC. In India, it has a regional centre in Kolkata, a rural development centre in Chittorgarh and a liaison office in New Delhi.