The Ghost In The City 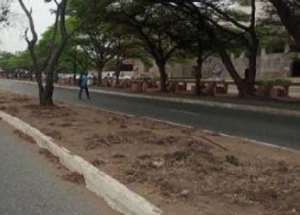 Often shapeless visits you in the dark and leaves you void.

I have no idea when it came. But it must have been there since Adam.

In Noah's time, it was there. It shortened dreams and shattered visions.

Often weird. I was then a lad when it came to inviting my dad for a dinner. The strong and the weak. The rich and the poor. The aged and the young. The fool and the clever. The Ghost in the City when it wanted, it came to them.

Often stupid. With its dark clothes and icy hands that's how grandma describes it. It came for the bachelor, the spinster and the married. It came for the ‘schooled’ and the non-schooled. It makes one wonders the essence of life’s pursuit.

That was in 1992 that I became aware of it when dad fought it fiercely at night and lost the battle. Then in our playground, there was a boy who till date is not heard of. He was worth his depth of knowledge and strength of his physique. But the Ghost came for him.
It was a market day when grandma and I had gone to sell her vegetables. The proceeds from the sale of the vegetables funded my school fees, bought my clothes and nourished my soul.
Grandma made pots and bowls out of clay. Many miles away from home, I went with her to get the clay.

At the time, child labour was never "conceptualized". I carried clay directly proportional to my strength or rather my age. We always almost went everywhere together. She taught me the wisdom of the aged. So this is the reason for which I am always accused of acting older than my age. She taught me Feminism. So those who don't know why I have a soft spot for women, this is the reason. Those who often tell me I am a man with a female hormone-this is the source. I grew up with my grandma but raised up by my mum.

And after we came back from the market that day, we counted the money from the sales and grandma kept it under her pillow. Up till date, I can't comprehend why I didn't inherit that money but rather those men who bided her the final goodbye to the eternal world.

That Ghost came for her in my sleep. It came for my cousin. Then my uncle. Then another uncle whom our souls were merged. It took a president and came for my president.

That mad wild wicked night lion came for my classmates and my workplace colleagues. It tied the lips of a musician and a poet of my time.

Often with a voice and often without a voice. It unleashes pain, bitterness, sorrow, misery and create hopelessness.

Peter Chambers knew this Ghost and he predicted that “Nobody lives forever”. The proud, the unforgiving, the heartless, the stubborn, the jealous, the generous, the treacherous and the pious all answer the call of the Ghost of the city.
That's why I don't support the wars, the violence, the protest, the arrogance, the greed, the mad crave for wealth, the discrimination, the binarism, the politics, the domination, the corruption and the vengeance.
May the Ghost, when it comes must meet you in love, unity and peace.
May that Ghost never shortlist you while we pursue the dreams of 2020.

What again do you have for Ghanaians besides economic theori...
10 minutes ago

Your plan to buy oil with gold instead of USD bogus; you're ...
48 minutes ago