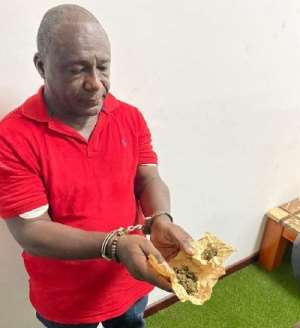 Now, we know the causes of the largely unfathomable and unimaginable threats which, courtesy of the opposition National Democratic Congress (NDC), have become rife in our body politic.

Until yesterday, it would have been unthinkable to imagine that a leading projector of the NDC, a so-called Apostle, would either be a peddler of Indian hemp or a user of the narcotic substance in a country where such activities are illegal.

God, it is said, moves in mysterious ways. Who would have thought that after his mind-boggling effusions during which he re-echoed the threats of the leadership of the NDC, Kwabena Owusu Agyei would be carrying 'wee' on his body when he was being searched before his admission into the custody of the Bureau of National Investigations (BNI)?

We would be hard-pushed not to concur that of the many who pass outrageous comments some are under the influence of opioid substances.

Those who descend upon a meeting of the leadership of the Electoral Commission (EC) with hoodlums, with the sole aim of disrupting the engagement should be examined as are many others within the party because they could be psychopaths. Their irresponsible remarks, most of them in recent times and bordering on causing mayhem and even disrupting the compilation of a new voters' register, are as unspeakable as they are telling.

To use such harsh and unprintable words on responsible dignities of society, some of them mothers and fathers, in the manner we have observed of late, highlights a creeping degree of moral decadence.

The same crop of persons are in some parts of the country spreading fear among the citizenry and engaging the ilk of the so-called Apostle (now in the grip of the security agents) to enhance the fear and panic mode they want the country to be in as we inch towards the 2020 polls.

Boakye Gyan tried it; now he has been silenced and it is unlikely that he would return to that tangent. Bernard Mornah did same and after his date with the CID headquarters, he is said to be in the northern parts of the country seeking to convince the people there that there is a deliberate attempt at disenfranchising them.

It does not even make sense. It is because of such attempt to deny them the chance of being registered that should rather encourage them to turn out in their numbers and register when the time is due.

Radio station hosts would be doing the country a great service when they examine the mental state of persons who appear in their studios or other venues as in the case of 'Apostle' Owusu Agyei.

Allowing such persons the leeway to hurl vitriolic upon distinguished personalities in society is unacceptable and should be discouraged now that teenagers listen to some of such programmes.

It was palpable that the man under review was exhibiting a high sense of irresponsibility and dabbling in the rather incendiary subject of ethnocentric defamation.

We in the media should appreciate the power we wield and deny irresponsible persons access to our studios and the pages of our newspapers.

We are pained that such a man could be followed to his house so he could continue with his inciting project. He said he had been tasked to work for an NDC electoral triumph. Whatever that means!