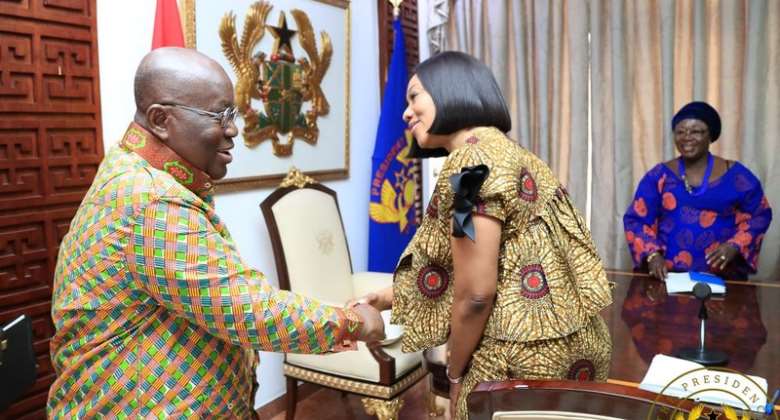 Increasingly, the Electoral Commission of Ghana is becoming the last stop for the state capture train assembled and fueled by President Nana Addo and his family members (in and out of government). This agenda is as visible as the existence and operations of the Militia groups of the NPP in Ghana today. Let nobody deceive anybody that those militia groups have been disbanded by the NPP.

In opposition, Nana Addo and his people showed their taste to executive this grand agenda of state capture. So, the current face of the NPP in government is a direct reflection of the NPP in opposition:

-Vindictive
-Wicked
-Dangerous
-Intolerant
-Belligerent
These and many others reflect the true character and face of the NPP both in opposition and in power.

Most like minded Ghanaians are only counting the days and weeks while waiting for yet another piece of the grand agenda to be unfolded. In the beginning, the style with which Mrs Charlotte Osei and others were removed from office amidst genuine resentment and resistance from popular voices is to test the grounds for the roll out of the rest of the episodes of this agenda. So, her removal didn’t just happen, but was well planned in opposition and properly executed in power.

Interestingly, the energy being employed by Nana Addo’s government and its agents to denigrate and frustrate the work of the current Auditor General was equally well thought out scheme. Once they made their minds to milk the state and fill their pockets within the short period in office, they will surely need an Auditor General who will be ready to take his percentage and shut up or cover up for them. This didn’t work well anyway, but they are still fighting. The hiring of private auditors to audit state accounts is a testament of this narrative.

The whole idea of forming and training parallel security forces (Invincible forces, Delta Forces, etc) to counter the state security agencies while in opposition was a part of the grand scheme of the state capture agenda of Nana Addo and his NPP cabal. This was a well crafted handle for the NPP to use to intimidate Ghanaians as partly showcased in Ayawaso West Wuogon by-election.

One would have thought that after winning election 2016 and forming the current government, Nana Addo and his NPP would be patriotic enough to disband these terrorist groups within the party. To our disappointment, they were rather fused into the state security agencies like the national security and given state power to unleash their unprofessional terror on unsuspecting taxpayers. Today, it is an opened secret that these militia groups are still operating under the command of the National Organizer of the NPP.

As if this isn’t enough, the financial sector which is the operational zone of the Finance Minister, Hon Ken Ofori Attah and his foreign business partners, was attacked, bruised and broken into unrecognizable pieces. This wicked agenda was unleashed on the growing local banks and fund managers. They were cleared for the monopoly of their foreign partners participation to triumph. Today, the likes of Group Ndoum which was doing well at the very local level where the big foreign banks won’t venture into, has been chased out of business. Other local banks were equally affected by this wicked agenda.

As of today, is there any amenable reason adduced by the National Communication Authority to why some radio stations were closed down? Aside some few irregularities in terms of compliance which are common in all democracies, what grave damage does the operations of these radio stations have for this country? Isn’t it an irony for the government to covertly introduce the culture of silence at the time we are called upon to praise same government for the passage of the Right To Information (RTI) bill? This is only to show that the government of Nana Addo has an agenda to execute and nothing else. Take over the media space too, so that they (NPP) dictate what is said and how it is said. Any wonder why most of the media units today are rather attacking the opposition instead of criticizing the government?

With the execution of all the above plans as packaged in the grand agenda, the last stop is with the Electoral Commission. Because the final seal of the agenda will be put on it after they win election 2020. So, the packing of the Commission with NPP TESCON Coordinators and known partisan professional voices was done to fit into the agenda of the state capture. This is why the EC is being administered as though it is some private institution formed with private resources to use these private resources to execute a private agenda.

What has the current leadership of the EC got right since their inception in office conterminous with Nana Addo’s NPP government? Is it the removal of critical IT staff to pave way for data manipulation in the future? Is it the limited registration exercise which was carried out in only EC District Offices against the existing convention of conducting same exercise at electoral areas? Is it the flawed referendum in creating the new regions which was marred with visible irregularities? Or the sustained resolve of the EC to compile a new voters register in the midst of genuine opposition by over 50 Civil Society Organizations and some political parties? The EC is fixated on how to tilt the weight for the NPP to be declared winners of 2020 elections even before the elections are conducted. So, anything beyond this is a nonstarter to Madam Jean Mensah’s Electoral Commission.

We are still having to make do with the conflicting stories churned out by the EC in the case of the procurement crisis which IMANI is leading the argument and revealing a lot of breaches and cover ups in the process. Has the commission been able to give any cogent reason why it is spending that much on a system which could cost far less? Do we need to spend that much at a time we are running over our heads and begging for money for our economy to breath? Big body, small brain, no food.

The unsavory antics and the belligerent posturing of the EC in a situation which needs consensus building and diplomacy, makes the Commission one of the most dangerous organizations in recent times. Seven Months to a crucial election in December 2020, in the midst of the uncertainties generated by covid19 pandemic, the Electoral Commission of Ghana is still not certain with the electoral register to use to conduct the election. If this is not confusion, then, what is it? After all, they don’t care what happens to the peace of this country once they are done executing the state capture agenda to the letter.

So, in the final analysis, the Electoral Commissioners' sole responsibility as given them by the President and his party the NPP, is to manipulate the results of the 2020 elections way before Election Day. This is professional stealing of the people’s mandate. So, Nana Addo and his family would have captured the media, the financial sector, the energy sector, the key state institutions including the EC and even control the private sector. With this, who dare who to make a beep sound when the Emperor roars.