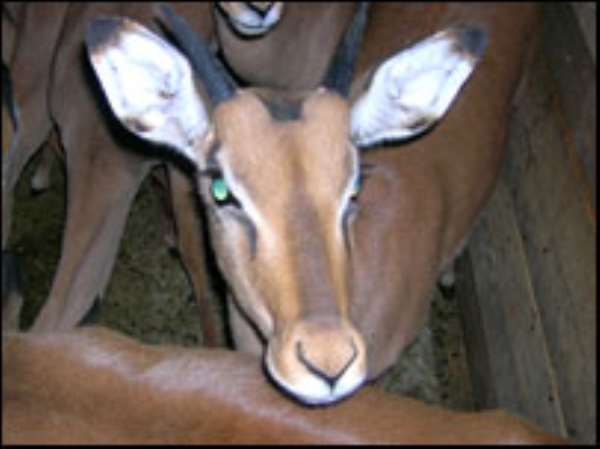 Wild animals from Namibia have been transported to Nigeria for a zoo to boost its tourist industry.

The 250 animals - including deer, giraffes and zebra - are a present to Nigeria from Namibia, from the time of ex-President Sam Nujoma.

Worth some $295,000, they left Namibia on a special charter cargo plane.

After arriving in Kano, in northern Nigeria, the animals will immediately be moved to the Sumu Wildlife Park in Bauchi state.

"Most of the animals are younger animals to allow for proper adaptation to the Nigerian climate and vegetation," Neels de Jong, who organised the capture of the animals, told the BBC.

The impala, springbok, oryx, kudu, blue wildebeest, eland, zebra and giraffe were taken to Windhoek International Airport, where it took six hours to load them onto wooden crates.

Each crate held three to six animals and were properly weighed before being taken on board the Boeing 747.

They will stay with the animals for a week until they have settled in and acclimatised.

"The animals are a gift from the Namibian government, and are intended to support Nigeria's efforts in building their tourist industry," Mr de Jong said.