Why I keep away from men Tinsel star, Matilda Obaseki 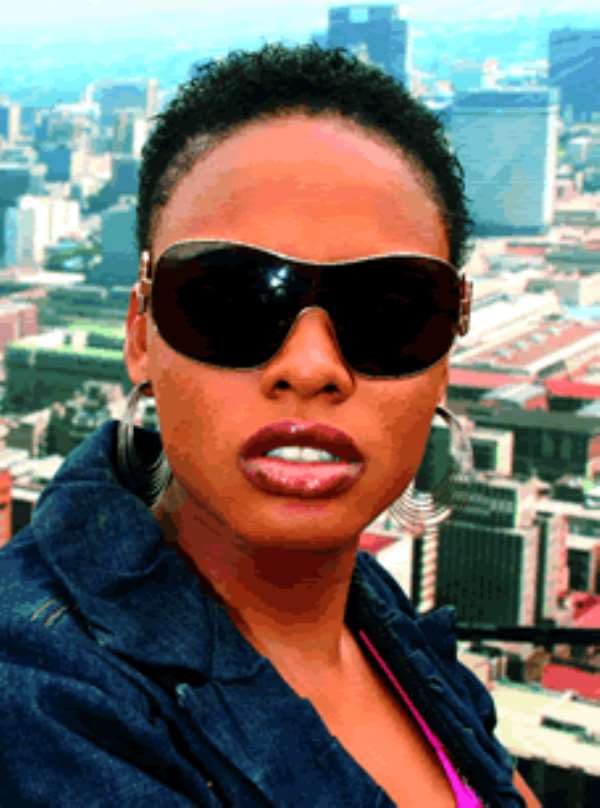 Leggy and pretty Matilda Obaseki is one of the newly discovered actresses currently serenading on the set of MNET's intrigues-filled soap, Tinsel. At 23, the Edo State-born emerging screen diva is so optimistic that acting will definitely take her to the next level, in the next couple of years.

Obaseki, who is also an aspiring writer, aside wave-making Tinsel, has in the time past proved her acting prowess in a few hit Nollywood movies and soaps. Despite her intimidating height, Obaseki, has refused to combine her fledging acting career with that of modeling. In fact, she openly confessed that the stress that comes with modeling scares her much.

Proudly single and not keen on settling down for now, the soft-spoken and sultry thespian, in this her first major interview, told Daily Sun the story of her chequered life and blossoming career. Obaseki also spoke on her reasons for dropping out of the university, a couple of years ago, the sad demise of her loving dad, coming on board of Tinsel, men, romance and many more in this enchanting encounter that took place at a high brow joint in the heart of Surulere, Lagos.

You're no doubt a damsel; let's meet you officially?

Thanks, my name is Matilda Obaseki, I'm from Benin City, Edo State. I grew up in Benin where I was also born on March 19, 1986, but lost my dad when I was eight years old. I'm also the last child in a family of seven. However, as the baby of the house, I was not pampered, I was only loved and shown love by my parents and siblings.

You're currently one of the hottest faces on Tinsel, the wave making soap on DSTV, how has it been so far?

I've been with them for more than a year now. I play the character of Angela, a personal assistant working in a production studio in the soap. The role of Angela is such that you can't put her in a box. Her strongest point is her ability to compartmentalize, meaning, she can live two lives, she is two-faced as a Janus, the Roman god.

How did you come about the role on the set of Tinsel?
I got information about the audition and reluctantly went on the last day.

And on getting there, I discovered there was no more form to fill. I was eventually forced to get a torn sheet of paper to write my name and other details, which I did. I was later invited for the casting, after which I went back to school in Benin. In fact, while all these were happening, I did not have a phone. Luckily for me, I was finally taken, thus making the whole thing to be fun.

And I'm so happy because this is my first major job with MNET.

Officially, when did you go into acting?

I started two years ago on TV and later a few Nollywood movies, but nothing major.

As a rising actress, what would you say are the major challenges since your arrival in the industry, especially on the set of Tinsel?

Well, at Tinsel, they do not look at how long you've been acting, but how well you're doing. The challenges are there, but I wasn't trying to compare myself with anybody on set and that helped to make my job easy. It was like a baby learning how to talk, the producer made things easy for me and all the other acts on set. Truth is that I was very scared when we first started.

I was even jittery and said to myself that God didn't actually ask me to act. But as we progressed, I realized that art is life and acting is the greatest form of art. That was when I also accepted the fact that acting is what I want to do. I have shot more than 50 fascinating and challenging episodes with the cast and crew of Tinsel.

What thrills and fascinates you most about being on the set of Tinsel?

The way everybody comes to the table with their A-Game, its like a fight, and we all strive to be the best and biggest. It's like a family thing too, very fun and intriguing.

So, how is your relationship with the other members of the cast?

I cope with them very well; the relationship is very okay and cordial. We tell ourselves the truth always. In fact, we have all realized that if one of us is not doing well, it means Tinsel is not doing well. So, in essence, we always work like a team.

In a nutshell, what is Tinsel all about?

Tinsel is basically a reflection of what the Nigerian film industry will be or look like in the next couple of years. It is our visualization of what the industry will be. The intrigues and power plays, inside the companies that made up Tinsel, we have cheating husbands and wives, those cutting corners and several other shocking events.

Your take home for the two seasons plus that you've been on Tinsel, has it been financially rewarding?

Sincerely, it's been good, the pay is good but I can't disclose it here. I never dreamt of getting to where I am now courtesy of Tinsel, so soon. I'm really grateful to my bosses at Tinsel.

After Tinsel, what's the next level for Matilda Obaseki?

The next level for me is much more than Tinsel, Tinsel is just the stepping-stone, I want to be in my own comfort zones and do things that will outlive me. Aside acting, which is my first love, I also write scripts and do other creative stuffs.

Are you a model, because you've got the height?

No, I'm not a model because I just do not have the strength.

You lost your darling dad almost 15 years ago, any fond memories of him?

Sure! It was a big house and we all had fun while he was alive. I truly miss everything about him even till date. He was and remains a hero to me. My dad never hit me while alive. I have stepsiblings but my dad was always bringing all of us together under his love and care without any rancour, under one roof.

Are you in any relationship currently?

No, I'm single, happy and not searching. And the reason is simple and straight; I'm putting all my strength into Tinsel and my blossoming acting career. I also do not have time to trade my acting career for any relationship now.

So, when exactly do you intend having time for a man or serious and steady relationship in your life?

Is not as if I'm scared of men, in fact, I had a few affairs, but it was not something serious. I became fully single when I started Tinsel. Truth is that I didn't choose to be single, it just happened like that and I found out that I also like it that way.

Are you keen on getting married soon?

I'm not itching to be married in the next couple of years. When the time comes, I will be looking for a confident and God fearing man. But for now, I'm okay being single. I always say that you can't lose what you never had. I believe in love so much. For me, there is no time frame on when I will be getting married; there are a whole lot of things that I want to accomplish before settling down.

Why not share some of the things with us?

First and foremost, I want to set up a foundation that will cater for kids, women and single parents. I was going home one day and it was very late, I saw a woman and her two kids sleeping on the road. I felt bad but there was nothing I could do, but that was not right. Those children I saw that night did not do anything bad to deserve that kind of treatment and rejection from the society. And my foundation will strive to help such people when it becomes fully operational soon.

Back to Tinsel, as a major member of the cast on set, what would you say makes you and your character unique?

I kept asking why me for the role of Angela. Truth is that I do not know anybody prior to joining the cast and crew of Tinsel. I also never lobbied to be part of Tinsel. A day before they called me, I was in school, very broke and could not pay my school fees. I sat down and was crying and asking God why he has chosen to abandon me. I was thinking of what to do when my sister called me the next morning and told me about the Tinsel invitation. I've always believed in God and have so much faith in him.

As a single, popular and dashing damsel, how are you coping and handling pressures from men, especially the stubborn ones?

Of course, you don't expect me to say to men, hey! I'm here, come get me. I just cope somehow, but do not dwell on it. Besides, I work most time and do not have the space and time too. That does not mean I do not come in contact with them, even the stubborn ones.

Having come on board Tinsel, what does stardom mean to you?

Sincerely, I don't think I consider myself a star. Not until I can prove myself to not only Nigerians but, the rest of the world, that is when I can call myself a star.

Can you pay your bills now?

Yes, I can pay my bills very well now and I'm so happy and thanking God always for making that possible, all thanks to Tinsel.

So, how rich are you now?

I'm not hungry and do not think I will ever be hungry.

Now, tell us, why did you drop out of school?

I left school because of so many pressures, that was in my 100 level, at the University of Benin, Edo State. Now, that I'm working and have enough money, I intend to get myself back to school soon. I'm going back to University of Lagos, to continue with English, a course I love so much.

In a nutshell, how would you describe yourself?

Most people generally misunderstand me, because I hate to be hypocritical and hate hypocrites with a passion. Above all, I have a good heart and very focused.

Can anything make you quit the set of Tinsel?

I don't know how to answer that, but not anything I know of for now.

What are the circumstances that could easily move you to fears?

I cry when I watch touchy scenes in movies or read emotional parts of a novel. I also cry when I see people, especially kids suffering or when people talk to me anyhow.

Have you ever cried for love?

Not for me, but for other people's ugly love stories and heart breaks. I want to also thank all the cast and crew members of Tinsel for their love and team spirit.