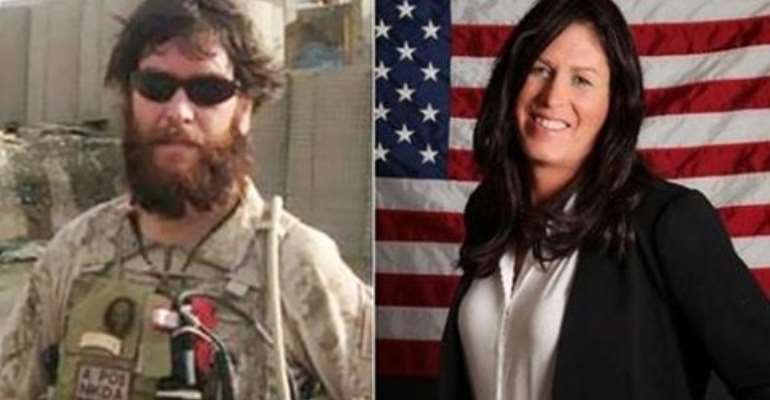 Photo of former Seal Team Six member Chris Beck before, left, and after becoming a woman.

A decorated, retired Navy SEAL will live out his post-military career as a her, after undergoing gender-changing procedures that'll finally allow the “Warrior Princess” to live like she's always wanted, according to the vet's new book.

Chris Beck — a member of SEAL Team 6, the famed unit that killed Osama bin Laden — served for 20 years and now lives as Kristin Beck, she chronicled in her biography “Warrior Princess.”

Beck had always wanted to live as a woman, but managed to suppress those thoughts due to the demands of a SEAL's busy, life-and-death career.

“For years Chris had turned off his sexuality like a light switch and lived as a warrior, consumed with the battle — living basically asexual,” according to the book penned by Beck and co-author Anne Speckhard.

“For Chris, the other SEALs were brothers and in the man's man warrior lifestyle, even if he had wanted to entertain sexual thoughts, there really was never any time to be thinking too much about sexuality.”

The heavily decorated Beck, with a Purple Heart and Bronze Star, retired several months before the famed SEAL Team 6 raid that killed the world's most notorious terrorist.

Beck's urge to live as a woman wasn't a passing fancy, according to her co-author.

"Chris really wanted to be a girl and felt that she was a girl and consolidated that identity very early on in childhood," Speckhard told ABC News.

Beck's retirement from military life was the perfect time to make the big switch.

"Now seemed the right time to go for it — to make his body match his identity — or at least start by dressing like a woman in his regular life,” according to “Warrior Princess."

Beck wrote in her book's preface that she hopes to inspire young people struggling with the same issues.

Beck wants "to reach out to all of the younger generation and encourage you to live your life fully and to treat each other with compassion, be good to each other, especially in your own backyard (where it be high school or your community),” according to the book.

The retired warrior also wants to reach out to all vets, who are striving to find peace in their troubled lives. She's opened a “peace garden” outside her St. Petersburg, Fla., to train vets gardening and landscaping.

“Too many of my comrades are returning from the battlegrounds of Iraq and Afghanistan and do not find peace and worse are committing suicide,” Beck wrote on her group's Web site Healing Grounds under her old name “Chris.”

“Sitting in my back yard or at my fishpond I no longer feel anger, resentment or depression; I feel peace. I want to give this option of a `peace garden' to my veteran brothers and sisters. We fought on the battlegrounds for freedom and the American way of life, now it's time to be welcomed home to a 'Healing Ground.'”

Let's Avoid Second Wave Of COVID-19 By Following All Protoco...
15 minutes ago