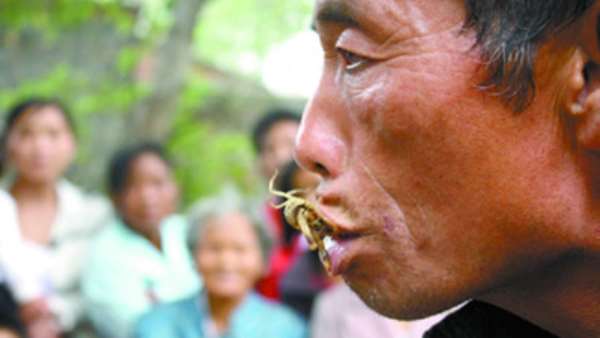 
A Chinese man says he has become addicted to eating live scorpions and reckons he's swallowed at least 10,000 over the last 30 years.

Li Liuqun, 58, says he got hooked when he was walking in mountains close to his home in Hunan province, central China, and was stung by a huge scorpion.

"I was so angry I picked it up and bit its head off. It tasted sweet and nutty and I never looked back. To me, they're delicious - like fried beans," he explained.

Now Li will eat 20 or 30 of the live beasts in a single sitting and seems to be immune to their venom, which can paralyse and kill humans in large enough doses.

"I still get stung but they have no effect on me," he said.

Medics say Li has probably become addicted to the venom, which is used in small doses in traditional Chinese medicine to relieve the pain of rheumatism.


More Social Issues
ModernGhana Links
Smartphone Addiction; Worst Lifestyle of the 21st Century
Check out twin sisters who got impregnated by same guy
Rasta's emancipating us from mental slavery
Dealing with Grief It is so hard to be there for a sad loved one
Family of 'Mona Mo Bl3' opens up on his mental health
Guinness Ghana champions the Progressive Portrayal of Women in the Media, Advertising and Entertainment industry
Progressive Portrayal of Women: Reflections on how we continue to shift the narrative
"I grew up in an orphanage" - Fatima of Date Rush reveals
E/R: Police Commander disrupts wedding with over 25 attendants
TOP STORIES