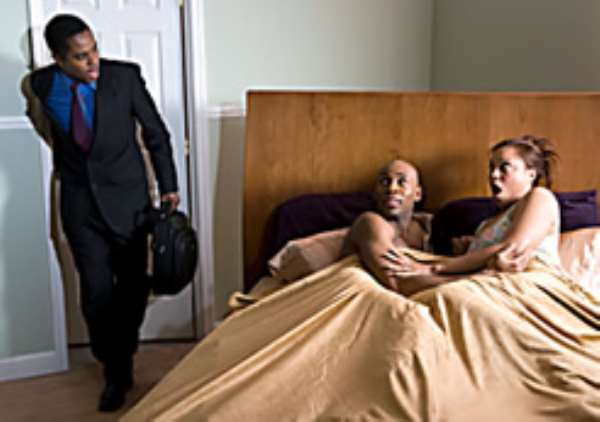 Hillary Clinton became the symbol of long-suffering married women everywhere when she famously stood by her man twice. But these days when a woman feels dissatisfied in her relationship, she doesn't just suck it up and complain to her friends over cosmopolitans. She gets a private email account, posts a profile at LonelyCheatingWives.com and starts looking for hookups herself. In other words, the stigma is gone. In the old days, the news that a woman supped at another man's table might have provoked scandal; now it barely raises an eyebrow. And if she's someone famous, well, that's just a boon to tabloid circulation'

'Affairs are not uncommon,' says clinical psychologist Nancy O'Reilly (aka Dr. Nancy). 'Women tend to keep these things to themselves, but there are signs that they're catching up with the guys.'

Accurate stats on women's infidelity are understandably hard to come by since ' no surprise here ' ladies aren't always keen on 'fessing up to their extracurricular activities. But it's generally guesstimated that 14%-40% of married women have intimately tangoed with someone other than their husbands.

In one unscientific yet telling poll at WomanSavers.com (the self-proclaimed 'world's largest database rating good and bad men'), women were asked if they had ever cheated. Of the more than 9,400 women who responded, 49% said they had. Another 26% said that they'd have no problem stepping out on their partners if they knew they could get away with it.

Why? The easy answer is that women today have the same opportunities to cheat as guys always did, says Dr. Nancy. Not only do working women have the chance to mix and mingle with would-be lovers (both in the office and on business trips), but the Internet is filled with chat rooms and websites like AshleyMadison.com and AffairMatch.com that blatantly court married men and women looking for a little something on the side.

Even so, it takes more than mere opportunity to get a gal to slide between someone else's sheets. We asked relationship experts to explain what inclines one woman to drop trou while another keeps her knickers on. Here are the six most common reasons:

1. Familiarity has bred indifference
The most common justification for infidelity that Dr. Nancy hears from women is that they feel taken for granted. You discuss what the kids did in school and which bills need to be paid, when the car needs an oil change and whether you should paint the house. But you haven't really talked in a while. You know, about all those things ' hopes, dreams, ideals ' that you spent hours discussing as you lay in each other's arms... before you had kids, car payments and a mortgage.

When a woman feels like little more than a household drudge, attention from someone else becomes extremely seductive. 'If there's a failure to communicate ' which is so reinforcing to women in terms of intimacy, emotional satisfaction and relationship satisfaction ' then women look outside the relationship for that kind of connection,' says family and marriage therapist Terri Orbuch, host of Detroit's Love Doctor TV and radio programs. 'This is the most important reason women cheat. When you're unhappy or dissatisfied in your relationship, you're more likely to be tempted to look elsewhere.' And, she adds, you begin to perceive 'opportunities' ' like Mr. Eager To Fill The Proverbial Void ' very differently.

2. You're leading parallel lives
You used to travel the same path side by side, but lately your interests have diverged. Your guy wants to shoot pool with his buddies or watch football during his free time; you'd rather go antiquing or watch British costume dramas. When you start doing things separately, your odds of connecting with others who share your interests increase, and soon you may suspect you have more in common with that guy you keep spotting at the Saturday revival showings of The English Patient than with your hubby. Share a couple of large buttered popcorns, and suddenly he's Ralph Fiennes and you're Kristin Scott Thomas, sneaking around on Colin Firth.

3. The passion has fizzled
'Some women are in pretty good marriages ' things are good, the kids are fine, the husband's okay ' but she's bored and needs some excitement,' Dr. Nancy says. And a casual affair may put some zing back in her days. 'It's something new, different and exciting,' adds Stephany Alexander, online dating expert and founder of WomanSavers.com. 'A cheating woman seeks the thrill of the chase and to see if she can get away with it.'

4. The fantasy has fizzled
A corollary to fizzling passion occurs when the romance fades and you realize your guy is not the fantasy man you fell in love with. Instead, he's a mass of irksome habits that are starting to get under your skin. 'Women who have false illusions tend to end up cheating because they never really knew the guy to begin with... or hoped he would change,' Alexander says. 'When a woman's Prince Charming turns out to be a frog, women often cheat in hopes of finding a new prince.'

5. Your ego needs a boost
You can be in a relationship with a perfectly wonderful, loving man and still need extra affirmation that you've got it goin' on. Sleeping with someone else is an easy way to remind yourself that you're desirable. 'Even if your partner is reassuring, for whatever reason, it's not enough,' Orbuch explains, 'and so you look elsewhere, so you can feel like you're lovable.'

6. It's payback time
Hell hath no fury like a woman scorned, as the saying goes. And when a woman catches her man with his hand in someone else's cookie jar, she figures she's got a right to a little indulgence of her own. 'If a woman finds out her significant other has been cheating, she may heal those hurt feelings by having sex with another man,' Alexander says.

So, if women cheat mainly because they no longer feel connected to their man, what makes a guy seek something on the side? Read 6 Reasons Why Men Cheat to learn what makes guys stray... and what women can do to keep 'em at home.

Will You Cheat? Rate Your Risk
It's estimated that up to 55% of women and 60% of men cheat at some point during their marriages. While you can't always control what your partner does, how likely is it that you'll be the one to do the straying?