Family of 'Mona Mo Bl3' opens up on his mental health 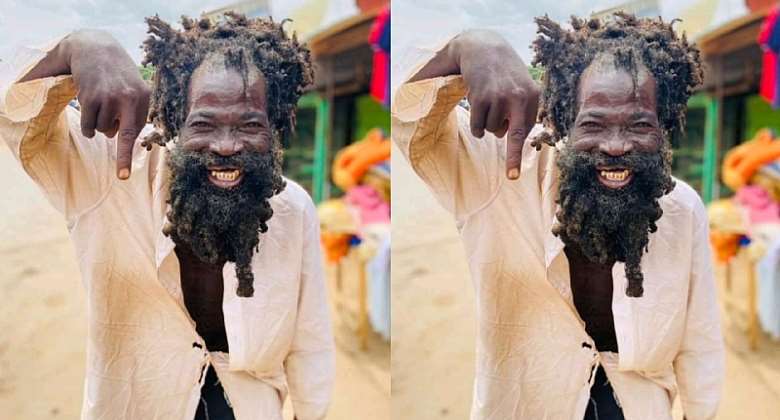 The family of Samuel Kofi Ampofo, a mentally challenged man who popularized the phrase "Mona mo bl3" on social media, has finally spoken about his condition which has left many wondering.

Though it's obvious Kofi Ampofo, who is now called 'Mona Mo Bl3', has a mental health concern, many have been wondering the state of his condition because of how wise he sounds when addressing certain issues.

Mo Na Mo Bl3 has gone viral with several videos on social media, one in which he said, those who aren't mentally ill suffer because they have to pay for everything unlike 'mad people' who get things free of charge.

Following his increasing popularity on social media, Kofi Adoma of Kofi TV has visited Mona Mo Bl3 and his family in Swedru to understand his condition with the pursuit to get him the help he might need.

His father, Papa Yaw Mensah, 80, who spoke during the interview said Mona Mo Bl3 is 52 years old and his first son out of children and detailed that he is not in a psychiatric hospital because he passed the test at Ankaful Psychiatric hospital so the Doctor he can't be admitted.

"I’ve taken him to Ankaful, he had a test with the Doctor by way of conversation and he answered every question he was asked correctly and he wasn’t aggressive so the doctor didn’t admit him," he told Kofi Adoma.

"It became obvious that he has a mental challenge but he is never aggressive. He goes roaming and when you call him he hardly comes home but he is very intelligent … he buys machines and sell for people," he said and speaking about his un-kept hair and beards he added that "he is very hairy, he shaves the beards but it grows back just after a month".

Detailing his Mona Mo Bl3's mental health condition, he said "he knows what is worrying him," and disclosed that he smokes marijuana when he noted that" it is the weed that has been smoking. He said it himself that it is the weed and that if he stops smoking, he will be fine but is not able to speak. He smokes more than a role and eats," Papa Mensah said.

His Mother, Akosua Mensah, sadly recounting how her son started smoking said “he was very intelligent I school … he said he slept and dreamt he had sex with someone and that saw him releasing on the bed but he didn’t tell us, he told a friend who took him somewhere and bought weed for him claiming it will help him feel relaxed over his dream”.

Watch the video below to hear more as Mona Mo Bl3 also spoke about his school life, hair, sex and more.

Hottest Photo Reports
Catch up with all the political quotes from our politicians.
Advertise here
More from Social Issues
ModernGhana Links
15 safety tips to prevent online abuse in society
Common reasons why so many people fall prey to online scams and how to avoid falling victim
Buying a Ghana-used car – 3 mistakes you must avoid
TOP STORIES

Lack of toilet facility in a school causes pregnancy of 15-y...
29 minutes ago