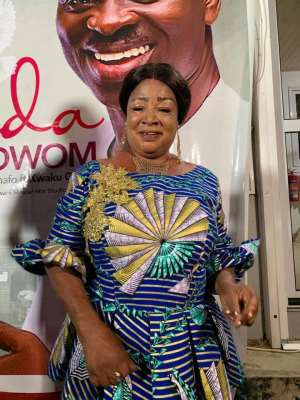 Realizing silent harm been caused by the management of the Asomafo Band a few days ago kept me wondering if others in the band are not prominent as Yaw Sarpong the leader of the band.

Has it occurred to entertainment fanatics that Maame Tiwa the lead female vocalist and others members of the band don’t get to enjoy any form of brand exposure, from print media, online presence, artworks/cover arts?

Well in my small and pretty corner I quizzed why is that happening to the others in the group, is it a malfunction or the management strategy to only get the image of Uncle Yaw Sarpong only into the media space or is it because he is the founder of the group?

Ah well! I feel it’s unfair to keep other key role members like Maame Tiwa out of such brand privileges, if she is capable of singing 95% of the songs owned by the group then I feel she deserves to enjoy same media projection given to the founder by the management of the band.

Citing a vivid example is their recent “Aseda” song, beautifully executed by Yaw Sarpong, Maame Tiwa, and Kwaku Gyasi, however the vocal queen and Kwaku Gyasi don’t get the opportunity to star on the song’s promotional artwork.

If may ask wasn’t both Maame Tiwa & Sarpong involved in the horrible accident which nearly took their lives.

Suggestion; Equality is a powerful tool to greatness, a significant item in the formation of a group, therefore it would advisable to practice such in the legendary group.

At least start by creating personal social media handles for Maame Tiwa and get her image on the cover or artworks, for its seems Uncle Yaw Sarpong is enjoying a man standing monopoly.

Maame Tiwa and the others in the group need a reference point in telling their musical story to their grandchildren one day.