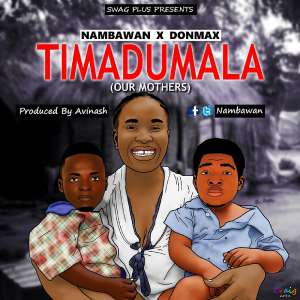 It is almost two the after the release the of Timadumala (Our Mother) by Nambawan and Don Max and the heat is very very storng in upper east and beyond.

The song sort to project the infinite abilities of women. According to them, mothers are very precious and contributes profoundly to nation building. They said, the lyrics of the song have been well written as to project the pain and toil that confronts mothers as the bump about in providing their children’s needs.

They added that, it is their intention to amaze their followers. They further noted that, the incessant eagerness of fans influenced the early release of the track. “Many fans ever since they had the hint have consistently pressured us to release the track”, Nambawan noted.

Donmax previously released hit singles such as “latohme” and “Poga dela” among others, while Nambawan featured Skery, trace, Stevo and the likes. The two promising music stars are very unique and loved for their ability to rap in their