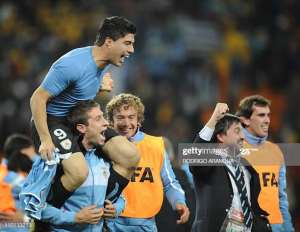 Barcelone forward, Luis Suarez has disclosed that one of his Uruguay teammates passed out while celebrating Asamoah Gyan’s last-gasp penalty miss during the 2010 World Cup

The West African country lost on penalties to the South Americans in the quarterfinal of the tournament in South Africa.

The talking points in that game was Asamoah Gyan’s last-minute penalty miss after Suarez had been sent off for preventing a goal-bound header with his hand.

Gyan failed to convert the spot-kick in extra-time, sparking joy from Suarez who watched on from the sidelines.

Gyan missed with the last kick of extra time

Recounting events that transpired during the game, the former Liverpool and Ajax striker said one of his teammates passed out while celebrating Ghana’s penalty miss.

“I didn’t kick anyone or anything like that, that’s why I think that I celebrated like that, for having taken a risk for something that was worth it,” the 33-year-old told the Players’ Tribune.

“And I remember that I celebrated it more than a goal. A teammate on the bench passed out on that play, hahaha.”

While Suarez was subsequently vilified and accused of being a cheat, he believes he only did what was best for his side.

The former Liverpool star said he cannot be blamed for Gyan’s crucial penalty miss, as he was rightly punished with a red card for his actions.