I Don’t Care If I Am Not Given Black Stars Opportunity Again, Says Majeed Waris 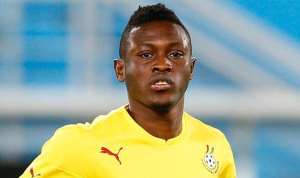 Ghana and Strasbourg striker, Abdul Majeed Waris has insisted that he will not be perturbed if he does get the opportunity to play for the country again.

The 28-year-old has not played for the national team after he was dropped from the 2019 Africa Cup of Nations (Afcon) squad.

After his fine season with FC Nantes, Waris was shockingly was dropped by Kwesi Appiah.

And according to him, he has achieved something better for himself playing in Europe and wouldn’t care if he is not given a call up again.

“I can see that we have new people on board [in management] and I see that there are a lot of changes happening,” Waris told Adom TV. I just hope that those changes will have a lot of positive impact in the team and in the nation as well.

“I remember the first time I played [for the Black Stars] before World Cup 2014 we played a match in Kumasi and you could see the way the people were happy. You can see there is love for football in Ghanaians.

“I don’t care if they don’t call me back [to Black Stars] because I have achieved something good for myself personally in Europe but I think we just have to all help to bring back that love to the people and support the team so that we can achieve something as a nation,” the former FC Porto striker shared.