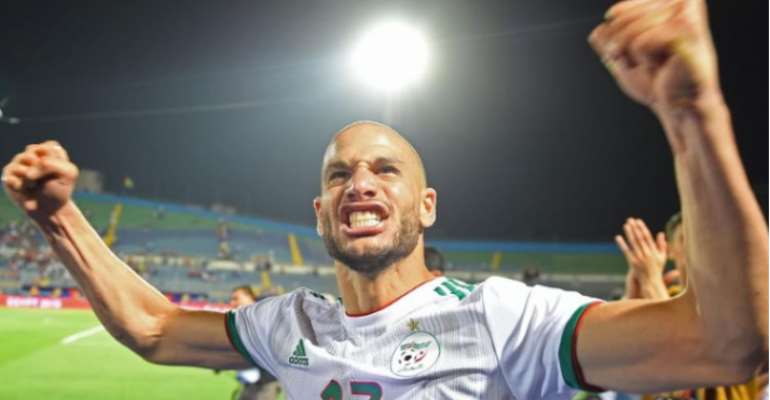 Africa Cup of Nations winner, Adlene Guedioura says next year’s tournament should be postponed or even cancelled due to the COVID-19 crisis.

Guedioura helped Algeria to lift the title in 2019, playing every single game in Egypt.

The 2021 tournament was scheduled to take place in June and July but was changed earlier this year to January and February because of the “unfavourable” weather in host country Cameroon at that time of year.

It means a number of Europe-based players will have to leave their clubs in the middle of what is likely to be an already delayed and congested season due to the current suspension of football.

“I know that Africa Cup of Nations is important and it’s good for the countries to organise it but this one in 2021, I think it should be cancelled or postponed,” Guedioura told BBC World Service.

“First they said it was in summer, then in winter, now we have the coronavirus which makes it more difficult to complete the qualification games.

“I think they should decide maybe to have it later. That would help many of the nations and many of the players also who represent Africa in the world.”

He thinks the majority of Europe-based footballers were against playing the tournament mid-season, even before the coronavirus pandemic.

“It’s much better to do it in the European summer anyway. I think the best Cup of Nations was the last one in the summer and it’s not just because we won it.

“With a Cup of Nations in January it’s in the middle of the season, you come back straight away to play for your club and you can get injured or you can lose your place in the team.

“If you’re not Salah or Mahrez or Mane, if you’re a player who always has to fight for his place [at his club], the manager can decide to pick other players which isn’t good.

“I remember most of the Algeria players told our manager Djamel Belmadi we’d prefer it in the summer.”

Guedioura says he has some sympathy for tournament organizers in the wake of the current crisis.

“This coronavirus you have to think about the safety of people and football comes very last, unfortunately. To organize the qualifying games is going to be very difficult.

“I wouldn’t be surprised if the tournament is postponed or cancelled, to be honest. It’s something they need to discuss. To organize this Cup of Nations will be very tough.”

They Sent 'Dante Crocodiles' To Our Area To Scarce Us — Ajum...
32 minutes ago

VIDEO: May Ken Agyapong Suffer From Paralysis And Be Numbed ...
51 minutes ago