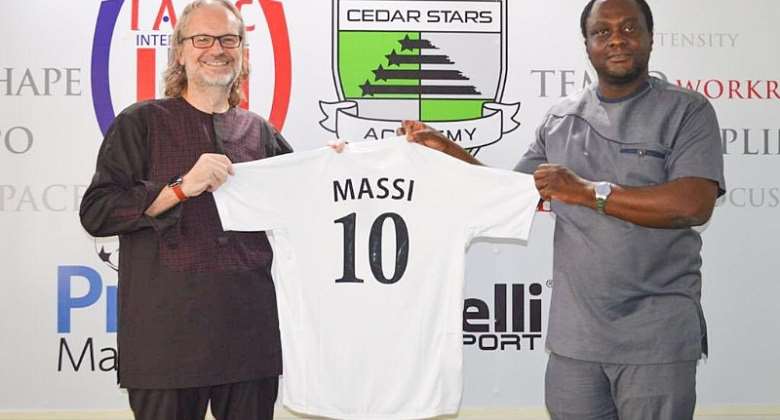 Inter Allies FC has established a friendly relationship with the Consul of Ghana to Italy after His Excellency Massimiliano Taricone paid a familiarization visit to the Club’s office.

The ‪Honorary Consul of Ghana to Italy, His Excellency Massimiliano Colasuonno Taricone paid a courtesy call to the Club last week after Serie A giants AS Roma chose the Ghana Premier League side as “AS Roma Club of the Week” on their Social Media platforms early this month.

H.E ‪Massimiliano Taricone stated the purpose of his visit was the first step in building a long-lasting, strong relation with the Consul, Italian Clubs and other potential partners.

To further show gratitude for his visit, the club presented customized Inter Allies’ Capelli Sports Match day jersey to the ‪Honorary Consul of Ghana to Italy.

“Inter Allies have bestowed a great honor on me by presenting a customized match day shirt bearing my name. I am a strong promoter of Ghanaian football and an avid AS Roma fan,” he said.

He added: “By the virtue the sport teaches, I thank the club for this honor and now starts a new path to work together.”

“Forza Inter Allies FC !!!!”
Inter Allies is set to involve the office of the Consul of Ghana for Italy as a regular feature in club activities when normalcy returns.

Inter Allies Vice President Delali Eric Senaye said: “We appreciate the visit of the Honorary Consul of Ghana to Italy. His ideas and suggestions are of high interest to our Club.”

“Inter Allies is confident that good things will come from our joint efforts and collaborations.”