Coronavirus Could Affect International Football For ‘Two Or Three Years’ 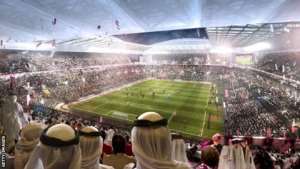 Coronavirus could impact on the international football calendar for “two or three years”, says a member of Uefa’s executive committee.

Lars-Christer Olsson, president of European Leagues, said that it would be a case of “wait and see” to assess the disruption of the pandemic, including on the 2022 Qatar World Cup.

Uefa hopes to complete the Champions League and Europa League in August.

A decision is set to be made at the end of May around whether this is feasible.

There are also plans to fit three – rather than two – fixtures into international windows this autumn to play Euro 2020 qualifiers and Nations League fixtures.

Olsson said that he would “rather see a scenario where the current season is not finished than not kicking off the new season”.

Following the widespread suspension of football and the postponement of Euro 2020 and Euro 2021, he was asked on a Soccerex webinar how long he thought that the international calendar could be affected.

“Probably two or three years I think,” he said.

Earlier, he had told BBC Radio 5 Live Breakfast that there was “no consensus” between countries regarding finishing the domestic season, as each country faces different situations regarding the virus and government decisions.

France’s top two divisions, Ligue 1 and Ligue 2, will not resume this season after France banned all sporting events, including those behind closed doors, until September.

The Dutch top-flight was abandoned last week with no promotion or relegation and no champions.

Asked how Uefa would claim to have a satisfactory conclusion to their competitions if competing clubs, such as PSG and Ajax, have not played football for many months, he said: “It’s difficult to say but in any case, it’s an extraordinary situation we are in and there have to be extraordinary solutions.”

Speaking on the webinar, he said: “For the time being we are planning, trying to squeeze in the rest of the season 2019-20 in the month of August.

“If that would be possible, then I think it would be fine because that would also mean that we can safeguard the integrity of the final phase of the current season of international football.

“But of course we have to take decisions about that at the end of May at least because otherwise, it will probably not be possible to squeeze it in and also to qualify the clubs for the new season.”

With the World Cup less than three years away, Olsson was asked if that could be affected.

“If the virus is developing in an even more serious way as it has been for the time being there will definitely be a problem with the international calendar,” he said.

“When some of the competitions are moved from one year to another. And then the Qatar World Cup is coming in the middle of the European system and you have to squeeze in domestic and international competitions. But I think we have to wait and see how that is going to affect the business.”