Manhyia Palace, the seat of the Asantehene of Asanteman has formed a three-member committee to conduct an investigation into the affairs of Kumasi Asante Kotoko.

The club owned by His Majesty Otumfour Osei Tutu II, the Asantehene of Asanteman has been in the news for some of the bad reasons in the last couple of months.

While it is unclear what the formed committee will be looking out for, a recap of a statement from the Manhyia Palace last week said: “A committee has been appointed to: a) Investigate all the circumstances surrounding Asante Kotoko sporting club's transactions with the Tunisian club Esperance which resulted in the FIFA ruling and the subsequent transfer of another Asante Kotoko player to the club.

“b) Investigate the failure of Asante Kotoko to meet its regulatory obligations for the Premier League license”.

According to a new statement from Manhyia signed by Kofi Badu who is the Chief of Staff at the Office of the Asantehene, the new committee will be chaired by Prof. Lydia Nkansah.

“His Majesty Otumfour Osei Tutu II, Asantehene has appointed Prof. Lydia Nkansah, Dean of the Faculty of Law, Kwame Nkrumah University of Science and Technology (KNUST) to chair the three-member committee to investigate the affairs of the Asante Kotoko Sporting Club”, the statement reads.

Other members on the committee are Mr. Kofi Owusu and Lawrence Bruce Kyei Esq. 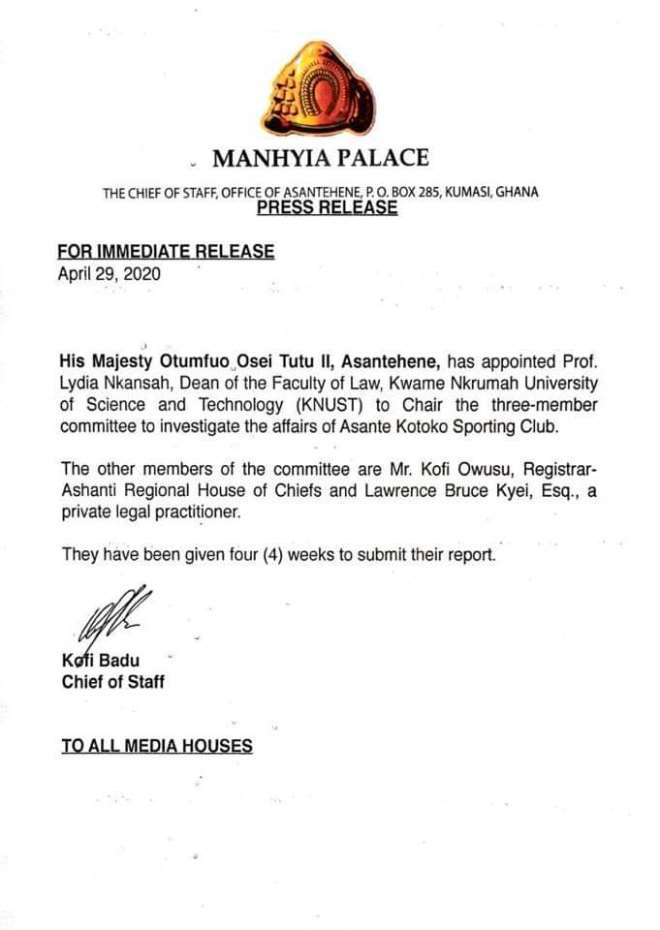