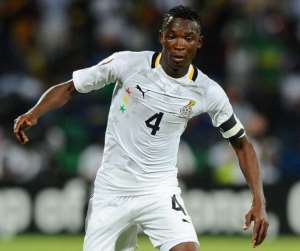 Former Black Stars defender John Paintsil who has represented Ghana at the FIFA World Cup with a good display has added his voice on GTV Sports Plus on the fight against the coronavirus.

According to the ex-player, the disease is real and has killed many people.

He urged Ghanaians, especially people who live in the local communities not to have hard ears, but do as ordered by the President of the nation, Nana Akuffo Addo and stay at home.

Paintsil was a member of Ghana Under 21 team who were runner-up in the FIFA World Youth Championship in Argentina in 2001 and played for the senior team in the African Cup of Nations in Mali in 2002 and Egypt in 2006.

He was also a member of the Ghana 2004 Olympics football team who exited in the first round in Greece, having finished in third place in Group B. Paintsil played in all the matches of Ghana's national team in the 2006 World Cup finals, where Ghana were beaten by Brazil in the second round.

He was a member of the Ghanaian 2010 World Cup team that reached the quarter-finals in South Africa before losing to Uruguay. He played in all five games.

Other ex-football stars who are in the campaign are Laryea Kingson and goalkeeper Sammy Adjei who spoke in Ga language to get down to the people.

Sammy Adjei said the fact that one has not seen the virus does not make him or her not to believe as the Covid-19 is real and has killed many people all over the world.

He urged Ghanaians to stay at home in order not to attract the coronavirus.