Are The Glory Days Of Hearts Of Oak Coming Back? 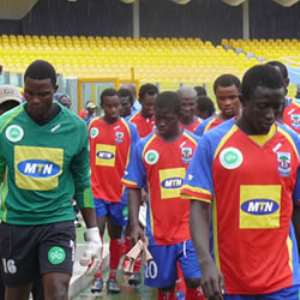 The mantra that “we will win the league this year” has been one of the famous sayings by one of the incontrovertibly best clubs in Ghana called Accra Hearts of Oak, who have gone on a trophy drought for more than a decade now. This hackneyed old saying has been a thorn in the flesh of the Phobians who look to break it someday.

A season with prognostications made by many football fans did not stop but got more intriguing when some men of God added their voices to it that indeed the never say die boys were going for glory, emphatically 2020 being their year.

The 2019/2020 season was underway with great expectations from fans as usual. The continental club masters did not start well when they hosted the 2010/2011 premier league champions, Berekum Chelsea, only to be jabbed by Joseph Asare Bediako’s men. A 35th minutes goal scored by Jonah Attuquaye was enough for the Brong-Ahafo boys to carry all the three-point from the Accra Sports Stadium.

Until covid-19, Hearts have played fourteen matches, won five, drawn 6, and lose 3, placing ninth on the table with 21 points out of the maximum 42. One point five (1.5) per game does not seem to worry the Phobians as they trail the league leaders by nine points playing one game less with 16 games and 48 points to fight for.

As the world goes through this pandemic, some fans may call it bad luck especially Medeama faithful’s who were on top of the 2017/2018 league until Anas’ expose number 12 which brought the league to a halt and later truncated.

Antithetically, the 2004/05 CAF Confederation champions see it as serendipity for them to add to their ambitious but fledgling squad. The likes of Nuru Sulley their former player, Abednego Tetteh formerly of Bechem United, Eric Dizan from Ivory Coast, Lawali Abdouramane from Niger, and Danjuma Ademola Kuti from Nigeria have been signed by the club to ameliorate the team and possibly put smiles at the faces of their fretting fans.

Despite having some foreign players like Shaun October from South Africa, Alex Kouame from Ivory Coast, Foovi Aguidi from Togo, the late Abdoulaye Soulama from Burkina Faso who could not meet the expectation of fans, Robin Gnagne was very stalwart for the rainbow boys, which later earned him the skipper of the team.

The never say die fans will hope and remain Pollyannaish about their recent signing to at least follow their former captain Robin Gnagne’s performance as at the time he was playing for them and hope they do not flatter to deceive.

Below are some probable line-ups fans will be looking out for when football resumes.

From the diagrams below, can we say that Phobians boys now have the depth and quality to battle it out with their arch-rivals Kumasi Asante Kotoko, Aduana Stars, Medeama, Ashanti Gold, and Chelsea? Can they bring back the days like the miracle of El-Wak, being Africa champions,, beating their arch-rivals for the confederation cup? Can they make their Chairman Togbe (King) Afede XIV have a beatific smile for the first time since he came? Only time will tell.