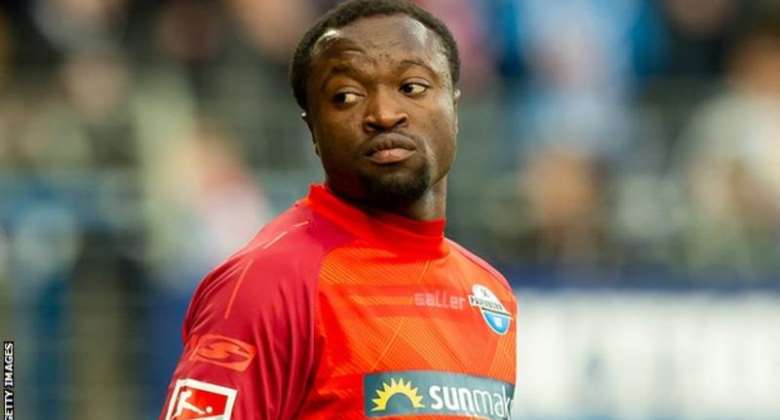 Ghana striker, Bernard Tekpetey has hinted he is targeting a return to the senior national team, Black Stars under CK Akonnor.

Tekpetey, who is currently on loan at Fortuna Düsseldorf from Schalke 04 was handed a call up to the national team in 2017 when he was included in Avram’s Grant squad for the Africa Cup of Nations.

During that tournament, Tekpetey made two substitute appearances against Egypt in the group stage and Burkina Faso in the third-place playoff but has not been invited again since the tournament.

However, the forward is aware of the stiff competition for places in the team.

Despite not being included in Akonnor’s first Black Stars squad, the Düsseldorf forward believes that once he works hard, he will get a callup to the national team.

“I think the new coach is trying to scout players as well who are dedicated and trying to play more so I think it is a great opportunity for me to try and work hard. With my club side, I have to what I do best to be able to earn his [CK Akonnor] callup. At the end of the day, I have to work hard because he is a new coach and everything is open so everyone can get the chance to play. I need to improve and showcase what I have for the coach to know that I am a good player so he can call me.“

The 22-year-old still has a lot of time on his hands and featured for the national U-23 team, Black Meteors last year.

The former Paderborn player only has one aim in sight when it comes to his future with the Black Stars.

“My ambition is to give my all for the national team and to the nation as a whole.”

The Bundesliga is set to resume on May 9 and Tekpetey is currently training with his club side Fortuna Düsseldorf whilst observing social distancing.