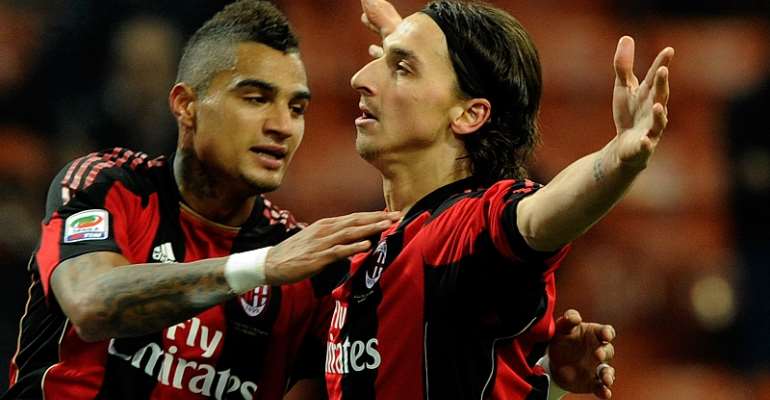 Ghana forward, Kevin-Prince Boateng has hailed Zlatan Ibrahimovic claiming the Swede gave him the "balls he dreamed of" during their days at AC Milan.

The former Manchester United forward has returned to the club after winning the 2010-2011 Serie A- title alongside Boateng.

Both men were summer recruits that year and had a hand in a combined 31 top-flight goals.

Boateng, who is currently on loan at Besiktas has advised Milan to keep hold of Ibra who is on a short-term contract.

"Milan must keep him [Ibrahimovic], he knows how to make a difference," the 33-year-old Ghana international told Sky Sports Italia.

"It was easy for me to play with him, I understood it immediately. He asks a lot of his teammates, but he gave me a lot of space, he gave me balls that I dreamed of.

"He was the perfect companion. He criticised everyone if he didn't get the ball well or if you were wrong in front of the goal, but in doing so he was teaching."

Boateng himself, who is now at Besiktas, on loan from Fiorentina, had a second Milan spell between January and June 2016.

He says he was convinced to return by long-time club president and former Italian Prime Minister Silvio Berlusconi.

"Berlusconi convinced me at the exact moment he called my number," the Berlin-born forward said. "The day after me and my agent went to him to Arcore, he asked me: 'My son, why don't you come back?'; I replied: "Right away". He didn't give a damn about the holidays."

AC Milan have experienced a dry patch since their Serie A triumph nine years ago, changing managers regularly with consistently inconsistent results. Boateng, however, sees former Schalke boss Ralf Rangnick as an ideal coach for the Rossoneri.

"He [Rangnick] can help a lot, he looks at football and beyond," Boateng said. "He is a very intelligent person who evaluates many details. What he has built proves it. He knows how to talk to the players and this is his key."

AC Milan are currently seventh in Serie A, 12 points away from the top four, and three points adrift of the final Europa League qualification spot.