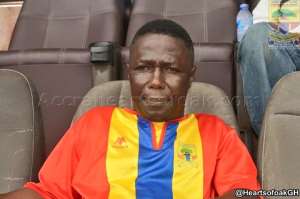 Hearts of Oak has constituted a three-member committee to investigate bribery allegations levelled against its member, Alhaji Braimah Akanbi.

A section of the club’s supporters have indicted Alhaji Akanbi of taking a sum of GH¢200 from Nkoranza Warriors President, Leslie Kuuku Bartels to aid the transfer of midfielder Emmanuel Sarkodie to the Phobians fold, something the Division One club’s boss has since denied.

The Committee is headed by Justice Ivy Heward-Mills with Frank Nelson and club Chief Executive Officer Frederick Moore as members.

“Yes, indeed Hearts of Oak gave me ¢500, but I never gave Alhaji Akambi ¢200 neither did I give him any amount out the money.

“Personally, I have advised Alhaji Akanbi to resort to court for his image to be redeemed even if I have to assist him,” Bartels said in an interview with Fox FM.

But the fans have maintained their allegation was true and petitioned the Hearts board over the conduct of its member.

The ad-hoc committee has also been tasked to advice the board on whether Alhaji Akanbi should step aside or continue with his routine activities.

The player was also on the radar of Asante Kotoko and Aduana Stars.

Reports indicate that the President of Nkoranza Warriors, Kuuku Bartels was led by Alhaji Akanbi to Hearts CEO Frederick Nana K. Moore to have a discussion on the player.

After the meeting which was held at the club’s Secretariat, Frederick Moore gave an amount of GH¢500 to Kuuku Bartels to use for transportation back to his base.

And Akanbi, seeing the Nkoranza Warriors chief off, allegedly took the GH¢200 with a promise to help necessitate the transfer of Sarkodie to the Rainbow Club.