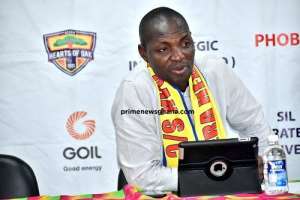 On Friday, multiple reports emerged that the Phobians have signed the Ghanaian international on a two-year deal

However, the club has described those publications as false.

But Kobby Jones believes Muntari will bring the needed spark missing at the club should the Accra based outfit sign him.

"Hearts of Oak have not signed Sulley Muntari but we will love to work with him," Kobby Jones told Sikka Sports.

"Having Sulley Muntari in Hearts of Oak circles will bring an aura to the club," he added.

The Phobians have beefed up their squad with the signings of Eric Dijan, Lawali Mamane, Nuru Sulley and Abednego Tetteh.

Meanwhile, Nigerian forward Ademola Danjuma Kuti is yet to be registered by the club.

Hearts of Oak finished the first round of the Ghana Premier League in ninth place with a game in hand.