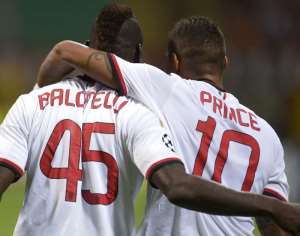 The pair with Ghana descent both played for AC Milan.

According to Prince Boateng, Balotelli lies a peerless football potential.

Boateng, now with Turkish side Besiktas, admitted that Balotelli possesses all it took to become one of the greatest players in the world.

The former Portsmouth star said, “The biggest potential I’ve ever seen in football is Mario," he told Thierry Henry on Instagram.

Boateng, 33, however, did not include the Brescia forward in the best players he played with, insisting there are many good footballers he shared the pitch with, however, Lionel Messi, Andrea Pirlo and Zlatan Ibrahimovic were outstanding teammates.

“The best I’ve played with is Messi, okay? There is a difference between playing against him and seeing what he does in training,” Boateng said.

“Then Ibrahimovic. He’s on a different level, he can play alone. And then Pirlo.”

He added that among the three players, Lionel Messi can guarantee you a win in every game, saying, “But if there is one player who can win you every game, it is Messi.”