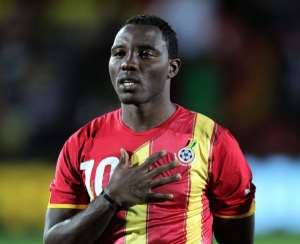 Former Ghana international Laryea Kingston believes Inter Milan ace Kwadwo Asamoah rates among the greatest African footballers ever but believes the utility man has been let down by his playing position.

At 31, Asamoah, who is reportedly set for a move to Turkish side Fenerbahce or Galatasaray when the transfer window opens in the summer, is nearing the twilight of his career after time on the pitch for some of the biggest clubs in the world, including Juventus.

The former Udinese attacker has had a glittering career, having won Serie A on six occasions with Juventus, the Coppa Italia four times and the Italian Super Cup in 2012, 2013 and 2015.

“Of course I will rank Kwadwo Asamoah among the greatest African players on the continent,” Laryea, now a youth coach at Norwegian side Nordsjaelland, told Goal.

“He is someone we have underrated a lot, especially football fans. If you look at him, he has done very well in every team that he’s played in.

“Apart from Udinese, he’s played for some of the biggest clubs in the world, in Juventus and Inter Milan. At Juve, where he won a lot of league titles and played in the Champions League, he was playing regularly and consistently for two or three seasons.

"He deserves the accolades.”
Despite his exploits in Europe, Asamoah, who has transitioned from an attacking midfielder to a left-back or left-wing-back over time, has never made the final shortlist of nominees for the African Footballer of the Year award.

His biggest continental recognition, perhaps, remains winning the Caf Most promising Player award in 2010 following a fine showing for Ghana at the Africa Cup of Nations and World Cup that year.

“Sometimes, it depends on the time that you are performing well. We have other African players that are also playing in their clubs and doing very well," Kingston added.

"So sometimes, it’s a matter of debate and the fans you get and all that. At the time he was doing very well at Juve, we had some other African players that were doing very well too at the time.

“During his time with Juventus, I think he was playing very well but the position he was playing [didn’t favour him]. When you look in the world, it’s very difficult seeing central midfielders or defenders winning a lot of those awards, be it world best or African best.

“People around the box or scoring goals are more advantaged. So I think his position let him down a little bit because he was playing very deep in defence.

“If he were playing around the box, he could have gotten more assists and goals and would have had the chance of winning it.”

A non-playing member of Ghana’s squad at Afcon 2008 where Laryea glittered, Asamoah rose to national prominence with a streak of fine performances in the qualifiers for the 2010 World Cup.

He has gone on to amass over 70 appearances for the Black Stars, including outings at Afcon 2019 where he last played for the West Africans.

“The first time I saw him was during his first call-up to the senior national team [Black Stars]. I saw him at our first training and I told everybody that ‘when we leave [the scene], this guy is going to take over’ in the national team because of his style of play, strength and everything,” Laryea revealed.

“He went to Italy, they changed his position a little bit but for me, I think he’s a No.10 that can help Ghana a lot.

“Unfortunately, we have not used him as a No.10 a lot because of the position we see him play at the European clubs. I think his playing position [in non-No.10 roles] in the national team took away the best of his abilities a little bit.”

Asamoah, who played for local side Liberty Professionals during his days on the local scene, also starred for Ghana at the 2014 World Cup in Brazil.