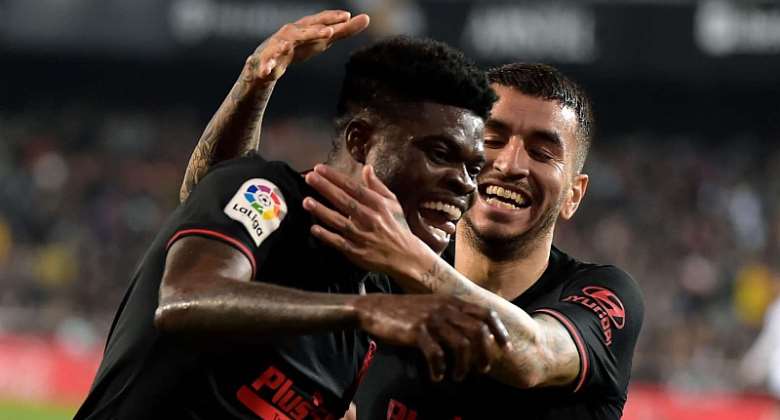 Thomas Partey is a player who has been on Arsenal’s radar for some time.

There was some interest in him last summer, and some informal discussions took place to see if a move could be possible, but the transfer fee was deemed too high and the midfielder was settled at Atletico Madrid.

Wind the clock forward nearly 12 months and that interest has not only remained but strengthened.

Adding a central midfielder to the squad this summer has been high up on Mikel Arteta’s list of priorities since the moment he walked through the door at the Emirates in December.

Prior to the Premier League-wide shut down due to the coronavirus pandemic, Arsenal had been searching for players they would like to bring in and Partey’s name was towards the top of that list.

Atletico Madrid are well aware of the interest, as are Partey’s representatives and - as we learned on Tuesday - so is Partey’s father.

Speaking on the Ghana-based radio station Tru FM, Jacob Partey said: "I called my son after hearing the rumours and he told me that the rumours are true. He told me they are holding talks between him and Arsenal. It all depends on the offer Atletico are demanding.

"If he goes to Arsenal, fine, they have a lot of supporters in Ghana. I will be happy if he decides to move to Arsenal. What they are discussing now is how Atletico will release him."

Those comments have caused plenty of excitement among Arsenal fans, although it must be noted that Partey’s representatives have distanced themselves from them, insisting they are not true.

Indeed, Partey himself reiterated that message on Instagram, posting a link to a statement that claimed "there is absolutely no truth in what the player's dad was alleged to have said".

And sources in Spain insist that the 26-year-old is happy in Madrid and that Atletico are confident he will soon sign a new deal to put an end to speculation linking him to an exit.

Talks are ongoing with the midfielder about a new contract which, crucially for Atletico, will see Partey’s release clause, which currently stands at just €50 million (£44m/$54m), dramatically increase.

Until that contract is signed, however, Arsenal will believe they still have an opportunity to lure the Ghanaian to north London, although the potential to do a deal of that magnitude has lessened because of the Covid-19 shutdown.

Prior to the pandemic, a fee of €50m would not have been out of reach, but with revenue streams now non-existent and the prospect of matches - when they do start up again - being played behind closed doors for the foreseeable future, the financial outlook at clubs across the world has changed.

Speaking to Sky Sports about Arsenal’s transfer business this summer, head coach Arteta admitted that the potential effects of the pandemic and the financial uncertainty it was causing meant he had no clue what sort of money would be available to him for transfers.

"I'm planning two or three different scenarios that we can face,” Arteta said. “Depending on one of those three, we will be able to do more, less or nothing.

"We have to react daily. We don't know what the financial situation is going to be, we don't know the rules, the timing, the window. There are so many things we cannot control at the moment."

When Arteta talks about being in a scenario which would allow him to do ‘more’ in the market, the suspicion is he means if Arsenal go on to secure a Champions League spot once the season gets back underway.

It’s extremely unlikely the Gunners would be able to afford as significant an outlay as €50m without the riches of the Champions League to bank on, given the financial black hole they are currently facing without any matchday income, which makes up 24 per cent of their annual revenue.

But Arsenal are still working towards the possibility they will do enough to qualify for Europe’s elite competition and that’s why the interest in Partey remains. Arteta wants a strong, fluent and energetic midfield to base his team around and the Ghana international would fit in perfectly in north London.

Since arriving, Arteta has tried different combinations in his central midfield pairing but seemed to have settled on a partnership of Granit Xhaka and Dani Ceballos in the weeks leading up to the shutdown, with Lucas Torreira and Matteo Guendouzi mainly featuring from the bench.

But with Ceballos set to return to Real Madrid at the end of the season following his loan spell, the arrival of Partey could be the long-term option in midfield Arteta is seeking.

He would provide the intensity Arteta is looking for and his impressive fitness levels mean he is more than capable of pressing quickly to win the ball back and turn over possession.

The midfielder also has an aerial duel success rate of 67.7%, with the majority of those duels being won in defensive areas, including the penalty area where he is strong when dealing with set-pieces.

But it’s not just defensively that Partey excels, he can get a team moving forward quickly as he has shown with Atletico this season. He is confident on the ball, whether it be when facing his own goal or when looking to start attacks.

And if there is no pass on, Partey has no issue with running with the ball himself to get his team further up the pitch. In fact, Thiago Alcantara at Bayern Munich is the only player out of the 242 in Europe’s top five leagues to have attempted more than 50 take-ons with a higher success rate than Partey’s 86.5%.

Perhaps the clearest example of Partey’s exceptional all-round game is the fact he is the only La Liga midfielder to have played more than 500 minutes this season with figures above 80% in terms of successful take-ons and pass accuracy, while also having won more than 65% of aerial duels and 60% of total duels.

So it’s not hard to see why Arsenal are keen to bring him to north London as he can build the play like Xhaka, break it up like Torreira and carry the ball like Ceballos. But it’s also easy to see why Atletico are so determined to keep him and get him to sign a new contract.

Partey is an Atletico product having arrived at just 17 and is a player Diego Simeone has invested a lot of time in. He has become an integral part of the side following Rodri’s departure to Manchester City and Simeone does not want to lose a player who is excelling alongside Saul Niguez.

But as long as that €50m release clause remains, Arsenal will feel they have a chance. And whether that turns out to be a pipe dream or reality most likely depends on if Champions League football returns to north London next season.