Usain Bolt, Who Is Still Showing Up To The Track, Lost A Bet On His 100m World Record 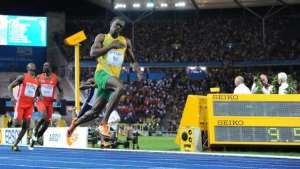 Usain Bolt overestimated his speed at the peak of his sprinting power.

Bolt predicted he would win the 2009 World Championships 100m in 9.52 seconds, he said in an Instagram chat with retired British hurdler Colin Jackson on Thursday. Of course, Bolt won that race in Berlin in 9.58 seconds, a world record that still stands today.

Bolt said he predicted his time before the final in a bet with his coach, Glen Mills, and a man named Eddie (likely his longtime masseur, Everald Edwards). Bolt chose 9.52. Mills 9.54. Eddie 9.56.

Bolt was supremely confident, despite crashing a BMW into a highway ditch on April 29, 2009. He required minor left foot surgery after stepping onto thorns while getting out of the wreckage.

“Even when I came back from the accident, I was training, I was feeling such good shape,” Bolt said. “So, for me, when we got to Berlin, I was on fire.”

Bolt’s world record going into the world championships was 9.69 seconds when he celebrated before crossing the finish line at the 2008 Beijing Olympics.

“I was told that with an all-out finish, after the opening 60 meters, Usain was projected to run a 9.52,” in China, Mills said later in August 2008, according to the Jamaica Gleaner.

He retired in 2017. Bolt said Thursday he had at least one moment of thought about returning but quickly dismissed it. But he still shows up to the track in Jamaica to visit Mills’ current crop of sprinters.

He grabs a watch and acts like a hardened coach, especially with Zharnel Hughes, the 24-year-old national teamer for Great Britain. Hughes has drawn comparisons to Bolt for his build.