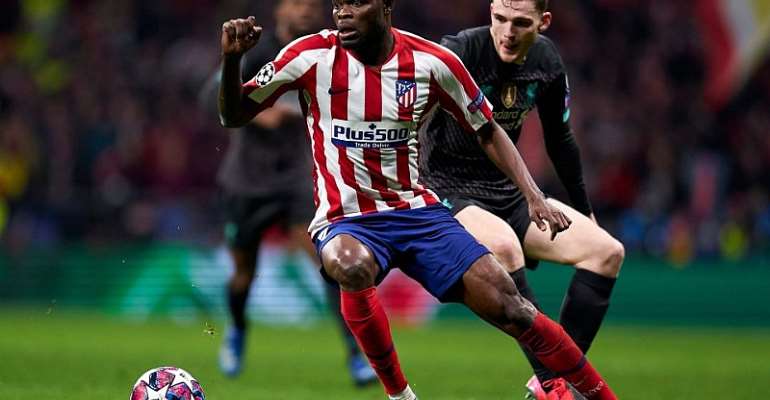 Thomas Partey is not in discussions with Arsenal over a possible move to Emirates Stadium, according to the Atletico Madrid midfielder’s representatives.

The player’s father, Jacob Partey, had told Ghana-based radio station Tru FM that talks with the Gunners were taking place and that he would be happy if he made the switch to join Mikel Arteta’s side.

He said: “I called my son after hearing the rumours and he told me that the rumours are true. He told me they are holding talks between him and Arsenal. It all depends on the offer Atletico are demanding.

“If he goes to Arsenal, fine, they have a lot of supporters in Ghana. I will be happy if he decides to move to Arsenal. What they are discussing now is how Atletico will release him.”

But JJ Sports, who represent the 26-year-old, have issued a denial and are quoted as telling Marca: “It’s totally untrue.”

It remains to be seen if Arsenal will decide to activate the €50m clause while it’s still applicable, with the Ghana international having been on the club’s radar for some time and initial discussions over a move having taken place last summer.

Despite the speculation surrounding a transfer to north London, sources have told Goal that Atletico remain in talks over extending Partey’s deal at Wanda Metropolitano and are convinced that the player wants to stay.

Arsenal, meanwhile, are looking to sign a midfielder when the transfer window opens, with the futures of both Granit Xhaka and Lucas Torreira unclear.

Uruguay international Torreira is on the wishlist of various Serie A clubs while Xhaka, who almost left Emirates Stadium in January, continues to attract interest from Germany.

It is, however, unclear when the summer transfer window will open amid the coronavirus pandemic, with football having been halted across the globe in an attempt to limit the spread of Covid-19.

The Gunners are unlikely to have significant funds for new signings, with the club’s finances having taken a significant hit during these uncertain times. Qualification for the Champions League also remains a key factor in budget allocation.

Come Back To Kokrokoo – Peace FM To NDC
1 hour ago