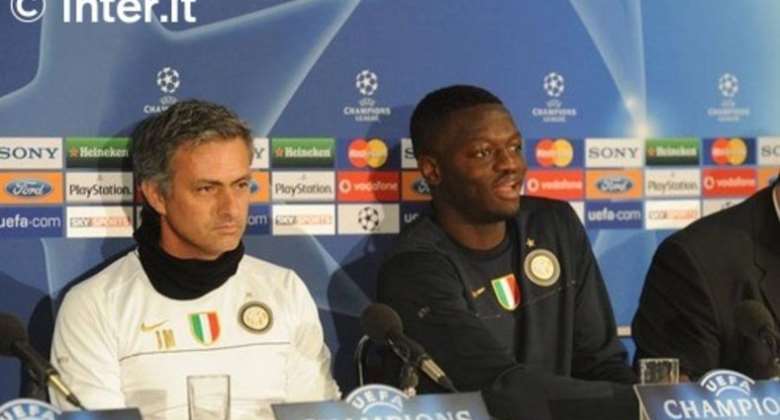 Sulley Muntari has stated he still maintains a “good relationship” with former Inter Milan coach Jose Mourinho even after a decade from their famous treble-winning campaign.

The 35-year old Ghanaian played 41 competitive games en route to winning a historic treble of the Serie A, Champions League and Coppa Italia, becoming the first and only Italian team to achieve this.

Muntari arrived in the summer of 2008, the same period Mourinho – who is now managing Tottenham Hotspur, joined, and went on to make 97 appearances in four seasons, scoring eight goals, providing 10 assists and winning a total of eight trophies.

“We were a great team, built by two great people in Massimo Moratti and Jose Mourinho, Muntari told Derbyderbyderby.

“We won everything. The relationship with Mourinho is still very good today. We are always in touch. We speak to each other almost every day, we have a chat consisting of the treble winners. Almost every morning someone writes something.

“Apart from the four who always tease me, Orlandoni, Materazzi, Chivu and Sneijder, everyone else is a good guy.”

Muntari also spoke about Mario Balotelli – whose formative years were at Inter. Both players also played together for Inter’s city rivals AC Milan and Muntari claims nothing has changed about the Italian who has Ghanaian roots.

“He [Balotelli] was just a child in that Inter team,” Muntari continued.

“Marco Materazzi and Dejan Stankovic loved him. When me and him played together at AC Milan, I didn’t feel that he had changed. He never changes but he had matured.”

Muntari is presently without a club and last played for Albacete in the Spanish Segunda Division.