Ghana captain Appiah ready to prove his worth 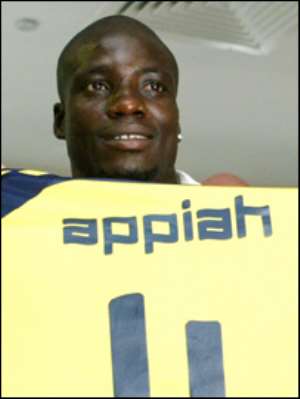 Ghana captain Stephen Appiah is the engine room of his side and the pivot around whom the team operates.
Ably assisted by lieutenants Michael Essien and Sulley Muntari, Appiah, a hugely experienced 25-year-old, emerged as one of the most influential players in Africa's World Cup qualifying campaign to lead Ghana to a first World Cup finals appearance.

He could emerge too as one of the best players in the finals, depending on how Ghana cope with their first-round opponents from the Czech Republic, the United States and Italy.

It helps that he has plenty of knowledge about the Italians, being a former Serie A "scudetto" winner with Juventus.

Appiah has been an international since his 16th birthday and his appearance in the World Cup comes after having represented Ghana at past world under-17 and under-20 championships.

He was the youngest member of the side that won the world under-17 championship in Ecuador in 1995.

Within three years he had made his Serie A debut for Udinese and after several seasons of acclimatisation reaped a $8-million transfer fee for the club when Parma signed him in 2000.

He joined Juventus three years later and in his second season helped the club to win the title, playing 18 times and joining a small band of Africans who have won Italian football's top domestic prize.

Now at Fenerbahce in Turkey, Appiah came close to another title although in the end his team just failed to catch Galatasaray in the race for the title.

Such is his importance to the Istanbul club that officials begged Ghana to allow him to continue playing for them up until the start of the Nations Cup finals in Egypt on Jan. 20, which necessitated several trips between Turkey and Ghana's pre-tournament training base in Tunisia.

His influence in Ghana's outfit was highlighted at the recent Nations Cup where he played despite a heavily strapped ankle in a vain effort to help the injury-plagued Black Stars get past the first round.