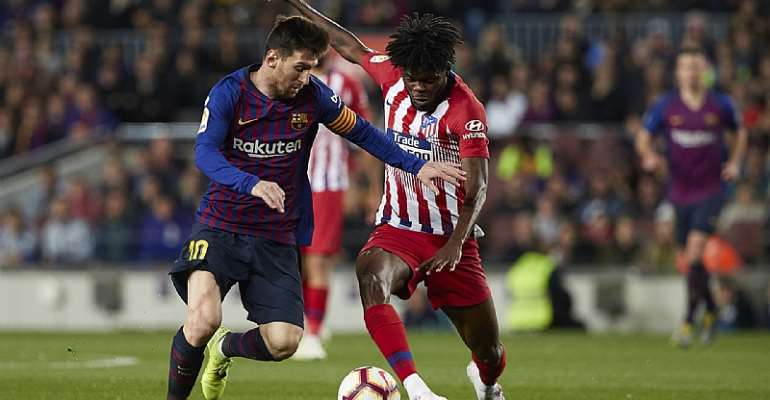 Ghana international, Thomas Partey has emerged as the best dribbler in the 2019/20 Spanish La Liga campaign.

The 27-year-old has been sensational for Atletico Madrid and was teh catalyst in their Champions League win against Liverpool at Anfield in March.

Even so much as to overcome Lionel Messi himself, in a specific statistic in which the Argentine would have to stand out.

This was revealed in a release by a Spanish sport press in top 5 most successful dribbles with 50+ dribbles attempted.

Despite Atlético Madrid's unusual position in the LaLiga standings this season before the break, Partey has won almost all the hearts of the mattress fans, thanks to this type of performance.

According to statistics compiled by Opta, Lionel Messi is not the best dribbler in La Liga, Thomas Partey is.

The Argentine is only fourth in the ranking of the best dribblers in the league this season, ahead of his teammate Frenkie De Jong. This ranking is led by Partey.

The midfielder has achieved a good 81.8% rate of successful dribbles this season.

He is closely followed and Villarreal midfielder André-Frank Zambo-Anguissa (81.1%). The two Africans are followed by De Jong (74.5%), Messi (67.3%) and Ever Banega (66.1%) close the ranking taking into account only the players who have tried more than 50 dribbles this season.

Until the break, Thomas Partey had 38 games between all competitions, with four goals and one assist.