Hearts of Oak is urging all of its former players to desist from making unguarded statements amidst the recent jabs throwing from Charles Taylor against Board Member Dr. Nyaho Tamakloe.

Taylor, a former Phobians in an interview descended on the Board Member for his comments on players who want to reignite their career in the Ghana Premier League.

According to Dr. Nyaho Tamakloe who spoke to Asempa FM, Hearts of Oak will not welcome every player but will rather evaluate their impact before giving them a second chance.

In a subsequent interview, Charles Taylor accused Dr. Nyaho-Tamakloe of being capable of collapsing the club. He argued the Board Member and his cohorts have become archaic as he questioned how much he contributes to the Rainbow family.

In a statement from Hearts of Oak today, they have stressed that they back what Dr. Nyaho Tamakloe said in his interview.

The statement further stresses that Hearts of Oak is an ambitious club and will not be turned into a platform for career relaunch.

It additionally says: “It is about time young local footballers are given the opportunity to shine but players should never forget the sacrifices club owners make in the provision of the platforms for their development.

“Having said these, we want to caution all from making such unguarded statements, for such statements do not serve the right interest of the club”

“We want to advise that a more mature and constructive approach in the discussion of Ghana football may earn proper recognition”.

Read the full statement from Hearts of Oak below: 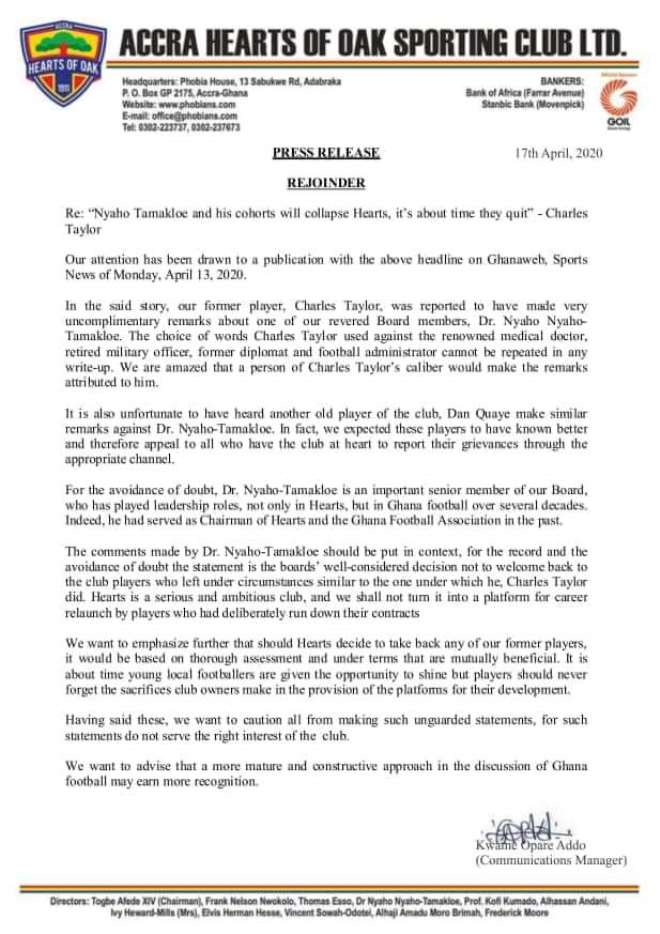