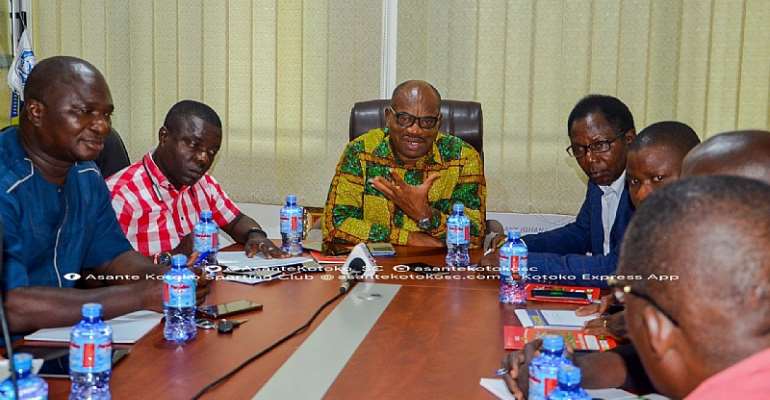 Management of Asante Kotoko has called for calm over the transfer of Emmanuel Clottey.

The Ghana Premier League have up to May 10 to pay up a fine of $240,000 or face relegation to the Ghana second tier after being found guilty in a legal battle with Tunisian club Esperance.

“Yes, we have received the Fifa notice, and we have to act on it," Management member, Nana Kwame Darkwah told Asempa FM.

“I believe that as a Kotoko family which entails management and the supporters, we need to make sure that we support our leader Kwame Kyei, so that we can find a solution to this problem.

“Let’s come together so that we find solutions on how we are going to pay this money."

The misunderstanding between Kotoko and Esperance involves the transfer of striker Emmanuel Clottey in 2015 and midfielder Kwame Bonsu last year.

“It's happened before, during Herbert Mensah’s time when Kotoko wrongfully dismissed Hans Dieter Schmidt, we were slapped with a huge fine," Darkwah added.

“Dr Sarpong was able to do an appeal for funds to raise money which was eventually topped up by management to clear the debt.

“So I will urge all of us to come together to help clear this current debt.”

After the Tunisians purchased Bonsu from the Porcupine Warriors last year for $150,000 [€136,829], Esperance also opted against paying up, instead deciding to offset the cost with part of Clottey's 2015 arrears and demanding $30,000 [€27,366] more from Kotoko to completely clear the striker's debt.

The issues reached the doors of Fifa who ruled in favour of the Tunisians.

Kotoko's management has come under heavy criticism for their role in leading to this heavy fine.

“There are issues but I feel it's not necessary at this point. Now is not the time to do interrogations and blame games," said Darkwah.

“Let's focus on clearing the debt first. And when all is sorted, we will learn the valuable lessons and avoid similar happenings in the future."

Kotoko, arguably Ghana's biggest club, have won the Premier League on 23 occasions, being the most successful club