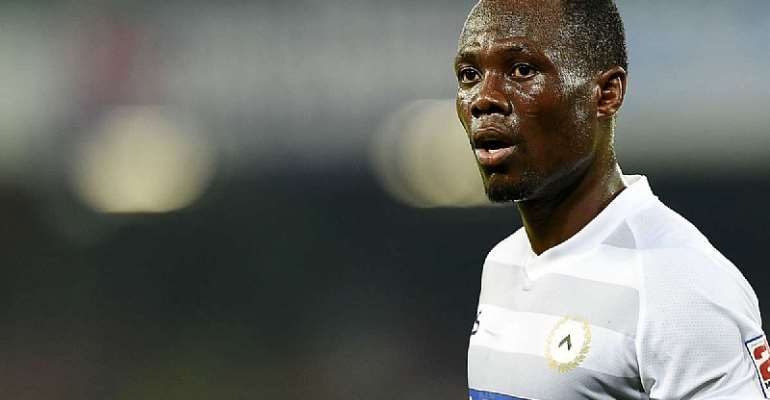 Ghana and Hellas Verona midfielder, Emmanuel Agyemang Badu has revealed that he was on the verge of losing his life due to the difficulties he has gone through as a player.

Badu mourned the death of his sister who was killed by his boyfriend at Berekum in Ghana, but because of travel restrictions, he hasn’t been able to pay a visit to his family back home.

According to him, he has been enduring torrid moments because he made an injury return and also faced the scariest moment of his life when he was diagnosed with a heart condition.

Agyemang Badu has shared the terrible experience he has been going through since 2019.

“I nearly died, I got a lot of injuries - and then I lost my sister in a very painful way," he told the BBC.

“It's very difficult for me and my family. The guy who shot my sister is on the run; they haven't got him yet, because things are going slowly because of this virus.

“It was a disaster. I live alone here in Verona. My girlfriend and my child are not here with me, and I'm in the middle of this pandemic.

“In August I came close to dying myself.
“We were in pre-season, everything was going well. It was a week before the league started.

“The morning after a game I came to the gym to do some gym work. That night I came home and was struggling to breathe.

“I didn't take it seriously at first - I thought it was tiredness.

“In the morning they gave me some painkillers. But the next night it was even worse.

“At 2am I called the doctor and fortunately he was awake. He sent a physio who was closer to me and he came - and immediately said, "we need to go to the hospital".

“Eventually they found out that I had a blood clot in my lungs. I had to stop playing football for three to four months.

“It was a very dramatic time for me but in certain times like this you need to be strong, thank god I'm back on my feet and doing well now.

“It was very serious, I think if I hadn't got the physio and the doctor to check up on me it would've been a disaster.

"I live alone here in Verona. My girlfriend and my child are not here with me, and I'm in the middle of this pandemic.

"I need to thank my family and friends and our team and my agent.

"My coach has called me every day to check up on me - as well as the team manager and the president. They have all been wonderful.

"Without them, it would have been a disaster.
"I have been in a room for 34 days. My sister has been killed painfully and I couldn't go to see what happened.

"But this is the job I have chosen. This is how the situation has been.

Agyemang Badu, despite being away donated to communities in Ghana to help support the fight against Coronavirus.

“I'm in the middle of this pandemic here in Italy, so I know how people are struggling and suffering. This is the time for me to help.

“I bought some masks, gloves and sanitizers for a hospital in Kumasi - the women and children's ward.

“And I played in Berekum for a long time, so I bought some for the hospitals there, and for the police and Muslim community.

“And in the village, I was born, I donated a lot of stuff to the police and the hospitals.

“They're saying prevention is better than cure, so I wanted them to have these things to be safe and be very careful of this dangerous virus.

“The numbers are increasing, so next week I need to send some more stuff to hospitals.

“We will keep doing it until we see this virus is gone. I am in the middle of it here and I know how much I'm struggling here so we all need to help and take care of people in Africa.