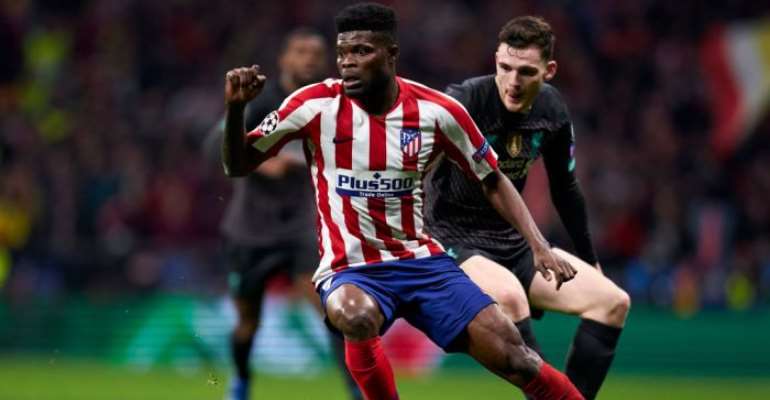 Arsenal are ready to sign Atletico Madrid midfield Thomas Partey for a region of £50million.

The 26-year-old Ghanaian international has caught the eye of top European clubs following his lassy display at Anfield as Atletico stunned holders Liverpool with a 3-2 win in the second leg to advance to the quarter-finals of the Champions League.

The 26-year-old has become a key man for Diego Simeone’s side and his impressive performance against Jurgen Klopp’s men has again put some of Europe’s big clubs on alert.

But it’s Arsenal who appear to be leading the race according to a report in Corriere dello Sport.

While the Gunners have Lucas Torreira and Matteo Guendouzi on their books, the defensive midfield role has been a problem position for many years, the vast majority of Arsenal fans still believing that they’ve never come close to replacing club legend and former skipper Patrick Vieira.

Partey would certainly be a major upgrade as new boss Mikel Arteta continues his rebuilding job having taken over in December.

Partey has played 35 times for Atletico this season and his willingness to put a boot in shows up in his yellow card count which currently stands at 13. Ten of those have come in La Liga.

The talented midfield kingpin, who enjoyed previous spells in Spain with Mallorca and Almeria, has also scored three times for the Madrid outfit.

He has also been linked to Manchester United and Manchester City as well as Serie A giants Inter Milan and Roma.