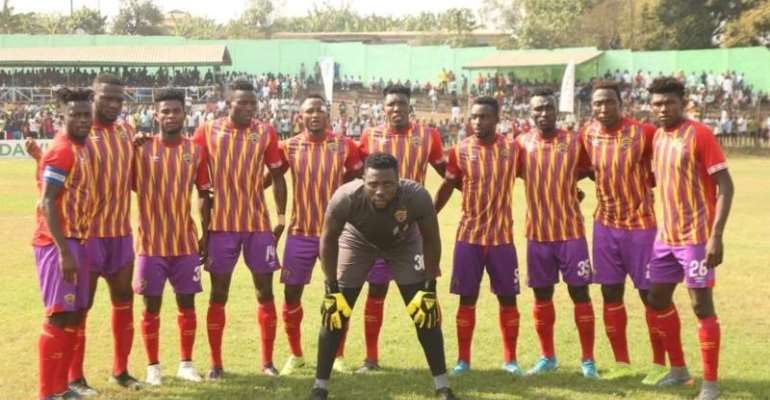 Hearts Of Oak are one of Africa's top sides

The coronavirus pandemic is having a "dramatic and significant" financial impact on Accra Hearts of Oak, the club's chief executive has told the BBC.

The Accra club are one of Africa's top sides, but football in Ghana was only just beginning to recover from last year's corruption scandal - the third disrupted season in a row.

And Frederick Moore told BBC World Service's Newsday programme that the knock-on effect of that, coupled with the coronavirus clampdown, was really hitting the club's finances.

"Last year we had a competition but it was a third of what we would have actually experienced in a proper football season," he said.

"The impact of that is that it lost some glitter in the minds of people about football. Also more importantly, the funding - the sponsorship - almost dried up for most of the clubs and it meant club owners had to dig deep into their own pockets.

"So when 2019/2020 came in, with the launch of the season and everything that went on, it was really encouraging to see football coming back."

A normalisation committee had been put in place at Ghana's Football Association to help stabilise the sport in the country following the corruption scandals.

Moore said the timing of the coronavirus pandemic could not have been worse, coming when football in Ghana was trying to get back to normal.

"In March, the whole of football was shut down again which is really, really disappointing in terms of the structure, the financing, and the love of football," he said.

"It took some time before people actually started coming back to the stadiums, and my concern is whether we can regain that very quickly."

Moore says the economic ramifications of this latest disruption to football will be felt by club owners and described how it would affect Hearts of Oak.

"Very dramatically and very significantly in terms of the financial impact on the club. European clubs have only had 2019/2020 season disrupted. Accra Hearts of Oak and Ghanaian football has had three years of disruption. So the impact on us is three times the impact on other countries.

"One of the things we're doing is looking at our business plan to see what we can do because when football started, we were beginning to get a lot of sponsors interested. And because now nobody is working, even our gate proceeds have gone totally to zero, our sponsorship companies are not working - so they can't give us any money. So it's basically left to the bare bones, the major shareholders and the owners of the club."

As a club, Hearts of Oak have continued to pay their staff, even though it's one of the biggest clubs in Ghana.

"So we've got a lot more people to feed and provide money for whereas some of the smaller clubs will just have the first team. We in the last year, kept the whole of our workforce and paid them for the whole year. A lot of them allowed a majority of their workforce to go and then recruited them when the football season started again."

There is now a worry about whether staff can continue to be retained, something Moore says is being discussed at board level.

"We haven't come to any definite conclusion yet. There are a number of reasons, but the critical one is that we don't know how long this is going to take. Because even if the all-clear is given, there is still a possibility that large gatherings - like 20 or 30 or 40 thousand people gathering at a match - might not happen this side of the 19/20 season."

As different leagues across the Africa try to assess whey they might be able to restart, Moore said the worry in Ghana is that clubs there may find they are playing catch-up compared to other parts of the globe.

"We are also a little bit behind the cycle because a lot of events happened in other places before us. So if we are not careful, lots of football could be going on around the world and then we'll be behind again and then we'll be doing catch-up.

"What I'm hoping is that the whole of the world's season is synchronized again so that it gives us an equal platform to compete - especially with the EPL [English Premier League]because both the EPL and La Liga have become very popular here in Ghana - partly because of the lack of football that's being played in Ghana."

Moore says despite the hiatus, he is looking towards the future - although issues like new signings are proving to be a challenge.

"I've been wrestling with it in my head myself. Our sponsorship companies have stopped working. We can't approach new sponsors... but at the same time, we can't stand still as a club, as a business.

"We need to constantly move forward. If we don't then we'll be going backwards because everyone else will be moving faster than us. So yeah, we know the risk involved. We could sign people - they might be on our books for so many months and not kick a ball - but we also believe we need to be ready for whenever the league starts."