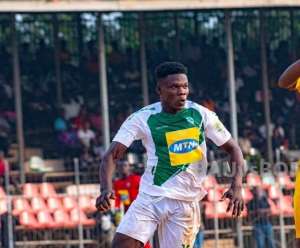 Ali Hufaz, 18, has burst into the scene in the Division One League and established himself as one of the most exciting players before the campaign was suspended due to the Coronavirus (COVID-19) pandemic.

His exploits have seen him attracting interest from a host of Ghana Premier League sides who are looking to reinforce their respective squads before the season resumes.

According to a report from Nidie3 FM, Medeama SC is the favorite to land the signature of Ali Hufaz after making contact with officials from Bofoakwa Tano.

Meanwhile, it has been uncovered that other top-flight clubs including Aduana Stars and Dreams FC have monitored the young striker and will try to hijack his likely transfer to Medeama.